Catching up with Kristeen Young 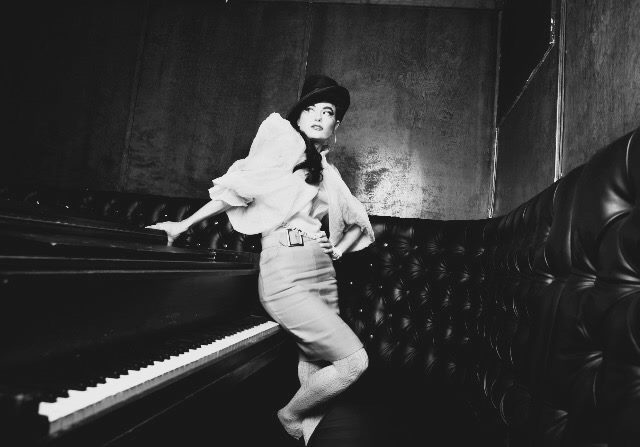 At a time where it seems that the more generic you sound the more successful you become, Kristeen Young is unabashedly unique. Although not a household name, Kristeen Young has built a solid reputation among some of the greatest artists in popular music, including David Bowie, Morrissey, and Dave Grohl. Young’s new album, “Live at the Witch’s Tit”, was released at the end of September – well, at least the physical version was. Censorship issues with her distributor led to delays in the album’s digital release, but thankfully the album can now be heard on all streaming services. Produced by Tony Visconti, “Live at the Witch’s Tit” takes the listener on a sonic adventure through the mind of Kristeen Young, at times dark, at times moving, and at times nostalgic. We reached Young at her home in New York:

Northern Transmissions: It sounds like there was a bit of a mess surrounding the digital release of “Live at the Witch’s Tit”, which was supposed to be released on September 29th. Can you talk a bit about what happened there?

Kristeen Young: Well, we submitted everything to the distributor months ago, and everything looked like it was fine on their side. Then on September 29th I noticed that it wasn’t up. So I wrote to them and they were like, “oh yeah, that album’s been rejected”. Like you would have thought they’d notify me about that before the release date! They said it was rejected because the album cover is “pornography”, and also because the album title is “Live at the Witch’s Tit” and they noticed that it wasn’t indeed “live”. Which is kind of funny because you’d think it might be rejected because of the word “tit”, but it was because of the word “live”. I had to tell them that in the English language “live” has other meanings besides a band playing and being recorded. Anyways, I had to write a series of letters, pour my heart out, and vaguely threaten them, and then finally they were okay with it.

NT: What a strange double standard, like Death Grips had an album cover that was just a dick on the cover.

KY: I have no idea what went into their thinking… I truly don’t understand it all. There are much more extreme things out there than this album cover, which to me represented embracing diversity.

NT: I watched the video for Catland a few times and it kind of creeped me out. I was wondering what does “Catland” mean to you?

KY: Well I guess the idea sprung from our drummer’s little girl, who is 5 years old and very imaginative. She has a very active fantasy world view on life. If anybody tries to tell her to change her behavior in any way, her answer is always “but that’s how we do it in Catland!”. I really like how she’s a creative thinker, so I got the idea for “Catland” from her, and some of the lyrics from the song are from things she’s said. She actually played the main character in the video and had the time of her life.

NT: You’ve worked with legendary producer Tony Visconti on several occasions, what does he add to the albums?

KY: Well he’s definitely brings a lot of experience. On this album though he wasn’t as present; he had a lot going on at the time we were recording. We were recording and mixing right after David Bowie died, and Tony was very busy and very emotionally involved as you can imagine. After Bowie died we had only completed basic tracks, so I kind of did a lot of the producing on my own and would email mixes to Tony for his feedback. I always like recording vocals with Tony because he’s very detailed in his vocal feedback, whereas when I record vocals with other people their feedback is essentially “that’s great”. Other producers don’t really give you any sort of direction on vocals, and I like Tony’s very detailed comments.

NT: How many records have you done together? You don’t usually see that relationship between and artist and a producer. It’s an impressive longevity.

KY: I think either five or six now? It’s true, but Tony’s had relationships like this before with other artists, like with David Bowie and T. Rex. Tony tends to be one of those producers that artists like going back to because he creates an atmosphere that feels very comfortable for experimentation. I think he’s very good with artists who have their own vision and own idea of who they are. He’s not going to give it to you. You have to come to him with an idea, and he’s very good with helping you make your vision happen.

NT: It’s been over a year now, but as a past collaborator of David Bowie’s, how tough did the news of his passing hit you?

KY: I still can’t believe he’s gone. David was such an important presence, it’s crazy that he’s gone. I knew that he had cancer for about a year before he passed, but we all just thought that he’d pull through. It was looking really good for a while, and then it just hit us out of the blue when we found out he was gone. It was so hard losing him and Prince in the same year, there aren’t many artists with such a creative scope, and I think we all felt a loss in a deeper way because of that. I’m hoping that their loss makes people more creative and inspires them to try to fill that void.

NT: I read you’ll be playing a giant castle at the Bloodlust Vampire Ball extravaganza in New Orleans at the end of the month. What are you most looking forward to with that? Any other plans for touring?

KY: We’ve actually never played in New Orleans before, so when we got asked to play it I thought that would be a great place to play New Orleans for a first time, especially over Halloween. Also I did some vocals last week on The Damned’s new album, and we’ll be doing some dates with them in February!