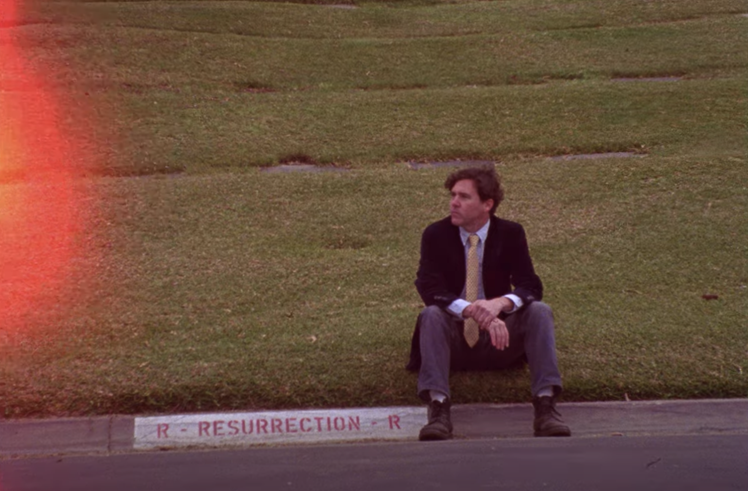 Earlier this year, well respected singer/songwriter/troubadour Cass McCombs released “The Wine of Lebanon” in partnership with Universal Audio. Today he has shared a new video for the track. Filmed in January, prior to the current shelter-in-place orders, McCombs visited the resting places of the respected and influential artists Ritchie Valens, Etta James, Merle Haggard, Darby Crash and more.

Below is a statement from the video’s director Aaron Brown about collaborating with McCombs and paying meaningful tribute to the artists featured in the clip.

“In this time of cultural and spiritual unrest, we present an offering to the ancestors for guidance. Social protest is a healthy expression of life, but it is also important to nest such actions in a greater context of our ancestor’s work. This step in the practice is in order to fully grow and mature from our shared, current experiences. The ancestors are there to show us what they discovered. For this, honor their wisdom and bring them offerings in order that we may not forget them and become stuck in a cycle of repetitious amnesia. The collective energy and unrest that we are all feeling now is the strength needed in order to truly grow, both as allies, and as subjects.

To name a few instances, in the 90s there were the uprisings inspired by the assault of Rodney King. In the 60s, there was the American Indian Movement occupation. There were the organizational tactics of the Black Panther movement, which in turn inspired La Raza. After that, the grassroots punk movements and the heyday of hip hop politics from Public Enemy to The Coup, and others.

It is essential practice to refer to these movements as touchstones from which to move forward. In doing so, we honor and pay tribute to the ancestor’s work. We reiterate the importance of this step because it is a fragile and ethereal container that can easily become lost in the echo-chamber of present-day persona-based exchanges of beliefs over social media. Take a moment to reflect and acknowledge that this important step has always been an integrated ritual of all great artists, thinkers, and practitioners of peace through which one consciously draws upon the spirit of their forbearers.

A note of gentle and general warning– If we do not honor this step, then their specters will rise up, whether we like it or not, to puppeteer us to do their bidding. We must work together and ask what dreams were left unrealized in their passing from the material realm. How might we help them manifest a finale to their work? We must work together.

In the case of Cass’s music, he honors many diverse characters in popular and esoteric music and art. The video for “The Wine of Lebanon” is a demonstration of a ritualistic offering to those ancestors from which Cass’s music has derived immeasurable inspiration. Although the video is specific to his creative ancestry, the intention of sharing it is to provide a paradigm with which any one visited by the muse can make their way back through the spirit realm and to the sacred land itself and give thanks and offerings for the transcendent feeling that is provided in inspiration. Simply, the video is on the one hand instruction and encouragement for other artists to engage with their ancestral lineage of artists.

A second note of warning, more specific to one’s individual practice – It is not enough to dress or play music that sounds like one’s image of inspiration; if we research who these personalities were, what in turn inspired them and what they loved and if we bring them offerings of corresponding value, then the spirits are made happy and bestow their happiness and good fortune on the one who has taken time to pay their respects. The internet is something in which we have become entangled, references abound as if free money. But references are not free money. They are works of art and people’s blood, sweat, and tears that one should honor, and to which one should pay tribute in some personal kind of way or another. We are not saying that one should run to their agents or to the ASCAP offices to pay them their royalties, rather we are saying to take time in private, or at a location of meaning to them, and pay them their due spiritual tribute.”