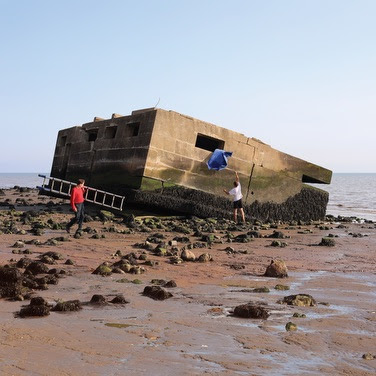 Spacious, minimal, lonely. Raucous, visceral, communal. caroline is an eight piece out of London, and they are a band who is breaking the mold, because they don’t seem to have the mold in consideration. Some songs are only three notes of buzzing guitar and violin, some are sprawling choir enhanced numbers full of feeling, instruments played to their limits, and raw and moving lyrics. Perhaps it’s because of all of their varied influences: midwestern emo, Appalachian folk, minimalistic classical musical. Their musical ethos and recorded songs reminds me of Dirty Three, with their use of the violin, of course, but also their sense for capturing emotions with the PERCUSSION of the instruments, for their impeccable sense of playing as one body made of different parts, with different moods.

One body made of different parts, is an apropos phrase. They start the album, “I want it it all / So I tell them.” And later in the album sing, “This isn’t the first time that you’re not feeling what you want to feel, accepting something, accepting someone real / Desperately I complicate your life.” It is an album that tries to come to terms with life on relational terms and as the sound is coming from sensitive players, the words seem to be coming from sensitive people. A sensitivity that sometimes seems sorely lacking in our social media saturated, staunchly individualistic Western culture.

They seem to tackle that on the one or two chord, trumpet laden song, “Engine (eavesdropping).” “Eavesdropping through images but how can I tell? / Everything lasts longer.” Spending our lives scrolling through other people’s feeds has left us with the impression that nothing takes time, nothing takes investment. The kind of investment that sees a condition and acts in such a way to alter it. “Can I be happy in this world? / We’ll have to change it.”

The lyrics are “simple” in a way that honesty is “simple.” And their sound is the same. They have discussed how “Sometimes things sound much better when there’s empty space.” While much of rock music, even indie rock music, is afraid to have lulls in the music for fear of alienating or losing an audience, caroline bravely make the “space” needed to serve the piece and communicate the emotions of a piece. Unlike television or social media, which is always bombarding you with colorful messages, they build trust with the audience, by willing to be silent or unshowy.

But though it has its fair share, it’s not a quiet album, altogether. They display their musical acumen, like on the beginning of the Appalachian influenced second song, “Good morning (red),” with its three four picked guitar, soaring violin, and super catchy melody. Or “IWR” (short for “I was right”) with its sing song melody that sounds like a hymn sung in an old church, which just grows and grows in sound and layers.

It is an unorthodox album but one that is quintessentially moving, with its authenticity and honesty. In a similar unorthodox fashion, they play their live shows in a circle. For a group of eight musicians, a community in and of itself, they act, like great bands like Arcade Fire or Broken Social Scene, as an invitation into a more communal way of life. A place where silence is allowed and where speaking your mind is allowed, where good feelings and uncomfortableness is allowed as well. It’s a bit of a spiritual experience listening to this album. In the one-body-made-of-different-parts vein, they end the album, “The word for world is forest.” We are all trees that make up a collective forest, a living, breathing collective, reliant upon each other and blessed and cursed by the connection.