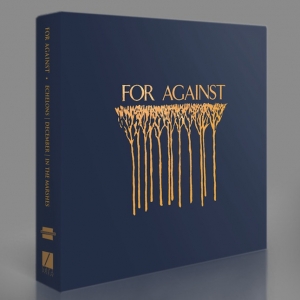 The Servants was an indie band formed in 1985 in Hayes, Middlesex, England by singer and songwriter David Westlake. Their brand of the mid-80′s jangly guitar-pop was intellectual, refined and classy as opposed to the shambolic and noisy lo-fi scene heralded by the C-86 compilation they would appear on and be connected with during their active career. After lots of lineup changes (including past/future members of The Auteurs and The Housemartins) and a string of great singles and one great LP (“Disinterest”) the band called it a day in 1991.

Available the first time on vinyl, Small Time (1991) and Hey Hey We’re the Manquées (1990) make up the second (and third!) reissues Captured Tracks is offering from The Servants, following Youth Club Disco. This set of hidden gems shine a light on the band’s layered, jangly guitars and sophisticated vocals that will delight fans of the band and fans of jangle pop everywhere.

For Against. Captured Tracks will be reissuing the first three full lengths from seminal Lincoln, Nebraska post-punk trio, For Against. Originally released by Independent Project between 1984-1990, these releases will see their first vinyl appearance in over 20 years in a deluxe edition limited boxed set. Remastered by Words on Music (by Marc Ostermeier of Should), the set will feature a bonus booklet and ephemera from the bands early career. For Against was an anomaly within the midwestern post-punk climate, offering melodic and dreamy hook-laden songs in stark contrast to the post-hardcore sounds of the time. With this release, their firmament and place within today’s current crop of guitar-based indie bands should be made secure.

The For Against 3xLP Box Set will be available in a limited run of 1,000. Each LP has an individual jacket that recreates the original album art and includes a 12 page 12×24″ booklet with full color photos and liner notes. All of this comes packaged in a beautiful midnight blue matte wrap box with gold foil stamping.

Small Time
Everybody Has A Dream
Don’t Leave Town
People Going Places
Complete Works
Dating Then Waiting
Born To Dance
Motivation
Let’s Live A Little
Aim In Life
Rejection
Fear Eats The Soul
The Thrill Of It All
All Talk
Out Of Your Life
Slow Dancing
Hey Hey We’re the Manquées
The Word Around Town
She Whom Once I Dreamt Of
You’d Do Me Good
She Grew And She Grew
She’s Always Hiding
Hey, Mrs John
Afterglow
Look Like A Girl
Third Wheel
Thin-Skinned
They Should Make A Statue
Move Out
Big Future
Restless