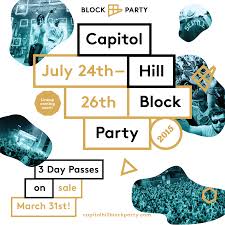 Capitol Hill Block Party (CHBP) today announced the first wave of performers confirmed for the 2015 music festival, which is scheduled for July 24-26 in Seattle. Headliners include TV on the Radio, UK garage punk band The Kills, and New York City electronic duo RATATAT. Discounted three-day passes are on sale now for $99 through April 2nd.

“This year I feel personally connected to the line up more than ever. I have history with many of the top tier acts dating back to their very first shows in the PNW, so its exciting to see them circle back years later headlining our festival. We made a concerted effort to book bands we felt best exemplified the spirit and history of the festival, putting an emphasis on indie rock and punk bands alongside genres like hip-hop and EDM.” said Jason Lajeunesse, the festival’s owner and producer. “We booked the acts we’d want to see and, as a result, the artists we chose reflect the energy and heart of this music festival and neighborhood.”

The full musical lineup and single day pass prices and availability will be announced in early June. Details regarding the visual arts program, creative installations, digital activities and more will be announced at a later date.