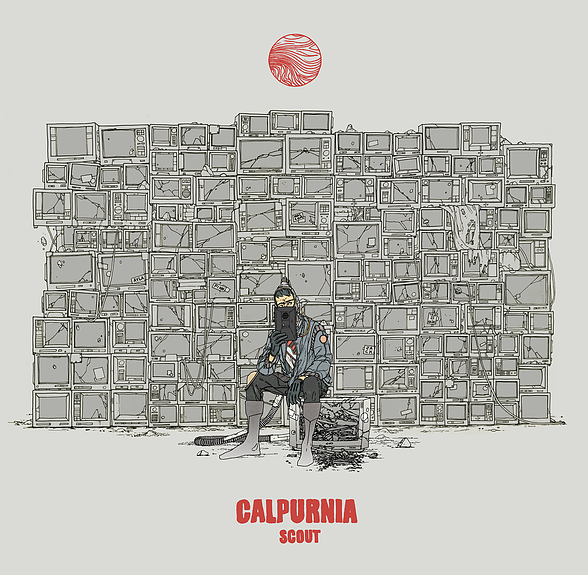 For a bunch of young Canadians, Calpurnia prove age and fame aren’t a factor in what makes you a good musician. Using some familiar indie hooks and sounds, the band constantly subvert expectations and play around with their writing. Though it can feel like a blend of ideas you’ve heard before, the way Calpurnia blends all their influences is what sets them apart. Finn Wolfhard and crew make sure that by the end of the record, you’ll want to dance and sing along on your next listen.

With a shrieking surf-rock, Calpurnia get mean on “Wasting Time” as they celebrate the joys of an efficient lover. While many of the individual pieces of songs like this feel derivative and all-too familiar, it’s the unhinged way that Calpurnia tie them all together that makes them exceptional. There’s also a wonderfully goofy spirit to much of the vocals and even the ramp ups in volume that make this record invigoratingly youthful.

Though it takes time to hit its stride, by the time the beats in full swing on “Louie” there’s a real sense of place from Calpurnia. With a Black Lips-like energy and sophistication to their simple, relaxing rock, the young band really show maturity beyond their years. Though much of the core writing stays the same, the slow addition of parts really expands the song into the something immersive and fun. Though it’s the loud and angry finale that makes this a really memorable way to open the record.

A deeper emotional palette comes into play on “Greyhound” when the band reflect on the hard emotional reality of separation. The dense sounds that permeate the song let its upbeat riffs really explore and feel more complex than they’re letting on. Like many of the band’s tracks, there’s also about a dozen new parts by the end of the track to make a simple riff feel larger-than-life. In the final choruses there’s also a stronger mix of disdain in the words to make it feel like time hasn’t helped their love grow stronger anymore.

“City Boy” blends in a little Mac DeMarco charm to make its jangly slacker rock feel nice and cozy. Though it opens with this seemingly calm energy, the riffs quickly grow as extravagant as the crazy harmonies behind them. Here however you do feel a little of the simplicity behind the band’s lyrics which are perfectly relatable but may prove too generic for some. Just in case you were bored however, the band rip into a heavy-rocking outro to insert a little punk fury into their relaxing song.

With brass in tow, “Blame” finds a more ethereal and soft tone of Calpurnia where they deal with emotional fallout. In the midst of this reverb-heavy sound-scape, they break into fast moments of release that spruce up the song’s low energy. This permeates the drums for the rest of the track as the song holds onto its new pace without looking back. That is until they go into a glossy slow-jam seamlessly to make for one hell of a ranged song on relationships.

As the rest of the vocalists join in on “Waves,” Calpurnia shows their breadth of talent on the album’s dreamiest number by far. If you can hold on in the song’s slow pace, ringing bells and growing range of voices continue to take the song further into new directions. Unfortunately this is the one track where despite their extended run-time, Calpurnia stick with their initial hooks and don’t change things enough to keep it constantly gripping. Though it has its charm and a really cute mix of instruments at the very end, it is just far too long for what it brings.