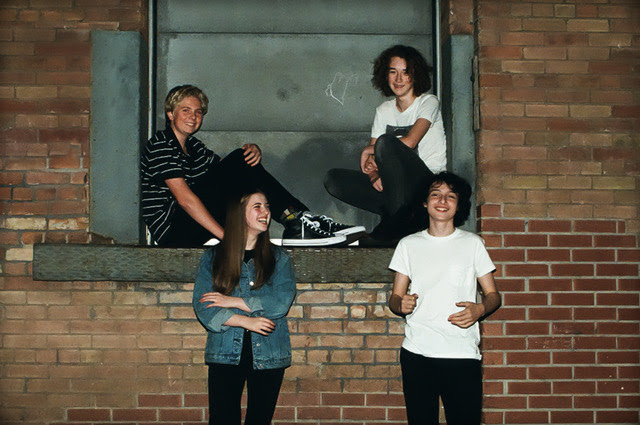 Calpurnia’s story is how teenage rock dreams are meant to unfold: four friends, all raised on a healthy diet of the Beatles, Nirvana and David Bowie, and a deep love for their respective instruments, retreat one day to a basement and begin jamming together. They cut their teeth on some cover songs and then, with just enough confidence and a dose of adolescent enthusiasm, they write and record their own tunes. And the results are nothing short of stunning. “It was kind of destined to be,” Finn Wolfhard says of the almost serendipitous genesis of the rough-and-tumble Vancouver-based indie-rock foursome he formed with three of his now-closest friends. “We all just really clicked. And when I’m passionate about something,” the singer-guitarist adds of Calpurnia, who this spring release their self-titled debut EP via Royal Mountain Records, “I like to get it done as quickly as I can. There’s not a lot of wasting time. I love just going for it. Go big or go home.”

Today, the band has given us a taste of what is to come from their debut EP which was recorded in Chicago this past November with Twin Peaks’ frontman Cadien Lake James serving as producer. The video for “City Boy” was directed by Josiah Marshall, bassist from Whitney, who captured the band while they were making their record.

Lead guitarist Ayla had this to say about the video: “This video is a look into a day in the studio working on our record with Cadien, filmed and edited by our now great buddy Josiah Marshall. Hopefully this video can convey how much fun this whole experience was for all of us, and that this music is really just the product of a bunch of friends who love music coming together to create something. We also want to thank Jason Bartell for creating the character you see here in this video, and who you might see more of soon. Lastly, thank you to Martin McPherson for making our video so much more colourful with his animation. This truly has been a team effort, and there is no team of truly talented individuals we’d rather be working with.”

Director Josiah Marshall added, “When I found out my friends Cadien and Andrew were recording this project I was excited to come in and shoot some video and stills. Ayla, Jack, Malcolm, and Finn were fun to hang with and it was nice to watch their recording process as talented individuals. I’m excited to see what’s next for these kids.”