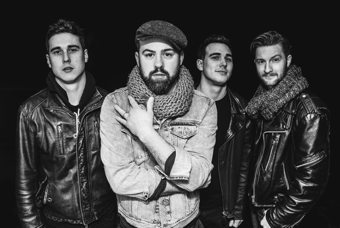 Winnipeg’s VIKINGS have shared lead single ‘Burning Man’ from their upcoming EP. On March 10th, VIKINGS will release Animal Kingdom. The band will celebrate the launch, on release day, with a hometown show at The Good Will.

On the track, the band stated that “Burning Man is about a person’s journey to find themselves in the midst of free expression and chaos,” the band comments. “Although it’s not necessarily connected to the infamous Nevada festival, it does exist in a parallel universe of sorts. It is a study on self-exploration and at its core it’s about those chance meetings, those explainable connections that can shape you; allow you to feel more. It’s a love song for all the people looking for deeper meaning in their lives.”

They continue, “This is the primary theme throughout the four songs on Animal Kingdom. It’s individual stories that all take place in different extremes of life. A barren wasteland, a tropical jungle or the eye of a storm in an urban landscape. It’s about finding connections with other people when you least expect it and navigating those experiences at that exact moment in time.”

Focusing on big sounds and the spaces in between, VIKINGS’ music is equal parts dance-worthy and expansive synth trip; featuring the earworm vocals of Josh Youngston – long ago punk-singer, now falsetto-wielding crowd-mover. Flanked by two brothers, Dave and James McNabb – each manning a bastion of synths – and with Luke Janzen on drums, VIKINGS step out of the box and onto the dance floor.