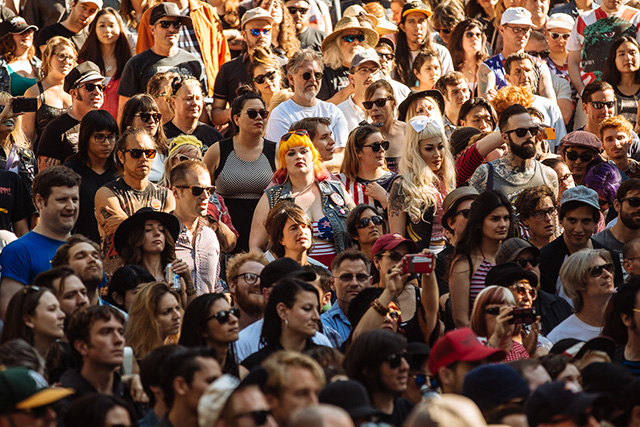 BURGER BOOGALOO is back for another year, along with last year’s host, film maker/writer, the always interesting John Waters. Today, they have announced the first wave of artists taking part. The festival takes place on June 25th & June 26th in Oakland, CA’s Mosswood Park, the Boogaloo promises to take the filth quotient and kick it up a notch in its seventh year. Joining the festivities this year will be film legend Traci Lords, who will be hosting a “meet & greet” (a measly $10 to meet Ms. Lords!). Also returning this year after last year’s triumphant reunion are Bay Area greats The Mummies, and reuniting for the Boogaloo this year are all-female San Francisco surf punk legends The Trashwomen! Add to those highlights The Flamin’ Groovies w/ Roy Loney (50th Anniversary of their first show), King Khan & The Shrines, Thee Oh Sees, Seth Bogart, Intelligence, Shannon & The Clams, and more to be announced very soon.

Early bird weekend passes are still available for a limited time at $49 (what a deal!), while early bird VIP weekend passes, which include a t-shirt, tote bag, Burger Records cassette tape, poster, and trading cards, are only $69 (the BEST deal!). Single day tickets $39, and for the first time this year, Burger Boogaloo is offering what they’re calling the Adult Diaper Pass, which, for $10, allows unlimited ins and outs all weekend.