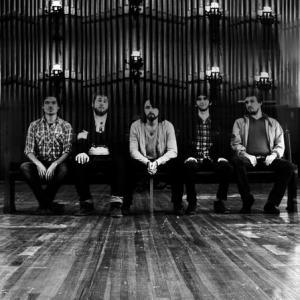 Brooklyn quintet Snowmine don’t just want to create music that you hear. They want to make music that you feel, that is in every breath, every corner and settles deep within the heart. That feeling is front and center, filling out all corners of their forthcoming album Dialects out February 4, 2014 on the band’s own Mystery Buildings imprint. The widescreen, intertwining instrumentation heard on “Rome” is a good document of this. Today the band unveils the “Rome” video, which is distinctly tactile thanks to the found footage throughout, and allows the song to truly draw you in. Check it out above. Lastly, the band has annnounced their first batch of 2014 tour dates, which you can see below.

The Brooklyn quintet formed out of a longtime friendship between bassist Jay Goodman, drummer Alex Beckmann, and lead singer/composer Grayson Sanders. They soon met guitarist Austin Mendenhall after his then recent move from the DC jazz scene, and finally invited their old friend, guitarist Calvin Pia, to complete the five-piece.

The band has built a completely organic following to date through successful touring and close fan contact on social media. After lengthy label talks, they recently decided to forego the label system altogether and self release their sophomore album on their own label Mystery Buildings.

From the band: “To give you some background on the recording, there are no foreign samples on this album.  Every single sound and orchestral moment was written, arranged, and recorded by us.  The goal of the album was to capture a surreal ambiance that married hyper modern ambient synth tones with vintage 60’s sounding cinematic orchestral motifs.  We recorded a choir, strings, woodwinds, and reamped synths in a church to capture truly real stereo reverbs, so in headphones you can feel physical, not artificially created space.”
***
SNOWMINE 2014 TOUR DATES:
12/12 Brooklyn, NY @ Music Hall of Williamsburg
2/5 Allston, MA @ Great Scott
2/7 Philadelphia, PA @ Johnny Brenda’s (Co-headline with Norwegian Arms)
2/8 Baltimore, MD @ Metro Gallery