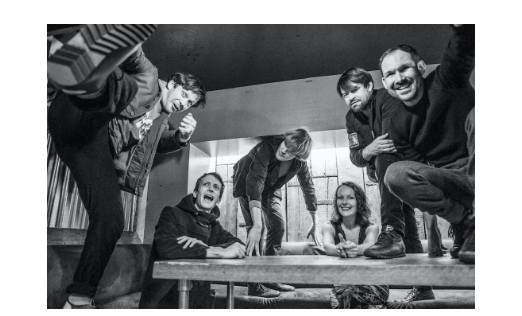 British Sea Power are back with the forthcoming LP ‘Let The Dancers Inherit The Party’ out March 31st on Golden Chariot (via Caroline International). Today, the band has shared lead single “Bad Bohemian”.

Of the video and single, Yan says: “I wanted the video to capture the feeling in between the real world and the virtual world; the way you can go from watching an entertaining Korean performer working with imaginary objects to live footage of war torn countries then sink into a world of cute animals before trying and digest global politics, all within a few clicks. I was inspired by artists like Kurt Schwitters, a ‘degenerate’ artist forced to flee Nazi Germany. He used everyday objects such as bus tickets in his famed collages. Today kitten videos are our everyday objects. Adding a video of a kitten is my way of paying homage to Schwitters – I was inspired by the idea that an everyday thing is capable of expressing something deeper whilst still being an everyday thing. I think the song has more going on below the surface than is at first obvious.”

The band’s first new material since 2013’s Machineries of Joy, Let The Dancers Inherit The Party is a melodic call to arms, direct and brimming with emotional urgency. It’s an album where rock muscularity joins inseparably with pop immediacy like a crate of bubbly exploding inside a Marshall stack.

Guitarist Martin Noble says of the album: “There wasn’t a plan to create an album with any particular subject matter but we’ve kind of ended up with a case of ’think global, act local’ – an album where individuals are dealing with their domestic and personal lives against a background of uncontrollable international lunacy. It was made to a background of politicians perfecting the art of unabashed lying, of social-media echo chambers, of click-bait and electronic Tonka Toys to keep us entertained and befuddled. All this can easily make the individual feel futile. But I think we’ve ended up addressing this confusion in an invigorating way, rather than imprisoning the listener in melancholy. Musically, it’s our most direct album and maybe the first one where we maintain a coherent mood from start to finish. Perhaps a little clarity isn’t a bad thing at this point.”

Recorded in Sussex, London and on the Isle of Skye, Let The Dancers Inherit The Party follows the band’s five studio albums for the great Rough Trade Records – a catalogue of releases that saw BSP become the longest continually-signed band in the label’s history. Rough Trade remain a vital part of the BSP story and will continue to do so, but the new album is being licensed from the band’s own Golden Chariot label to Caroline International.

Let The Dancers Inherit The Party album art features typography influenced by the German Dadaist artist Kurt Schwitters, whose work BSP’s two vocalists, Yan and Hamilton Wilkinson, discovered while growing up on the edge of the English Lake District. Schwitters fled Nazi Germany in the 1930s and ended up living in the Lakes, where examples of his work now reside, including at Abbot Hall Gallery in Kendal. BSP have long used Schwitters’ sound-poetry recordings in their live shows and, in 2013, Yan created a Schwitters soundscape for Tate Britain.