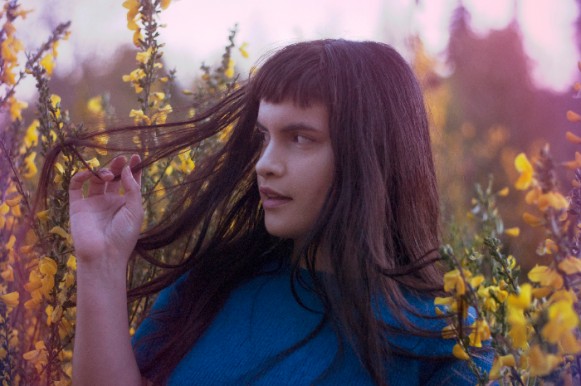 Briana Marela is sharing her video for “Dani”, taken from her Jagjaguwar debut album, All Around Us.
It’s a mix between a video and a performance art piece, orchestrated by Briana’s friend Jody Poth who is an aerialist and choreographed a routine specifically for the video. “Dani” is a song about a mutual friend of theirs who was going through depression. Jody states, “I knew instantly that I wanted to collaborate with Briana on this piece; I could see how the nature of the aerial silk would create these artificial limits that a body can push through, just as in life.”

Alicia J Rose, director also adds, “Transforming Briana’s idea into striking visuals and creative framing to capture Jody’s incredible performance was an exciting and fun challenge. In editing the piece I aimed for a lyrical intimate cut where the music drives the performance and the viewer almost feels like they are up in the air with the dancer, a perspective we rarely get to see with aerial dance.”

Briana Marela has also announced a string of European tour dates in support of her first album with Jagjaguwar, All Around Us.