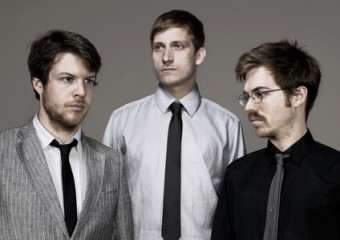 Brandt Brauer Frick is a trio of classically-trained musicians from Berlin that make dance music. The group has performed at music festivals around the world, including Coachella, Glastonbury, Moog Fest, Bestival, Sonar, etc.

Sometimes what you don’t do is as important as what you do. Brandt Brauer Frick have made name for themselves producing techno without the technology, using classical instruments in preference to synthesizers and computers. It’s a negative that’s had positive results.

On the Berlin trio’s third album Miami, once again it’s what Brandt Brauer Frick are not doing that is important: they aren’t slavishly following the formula of the album’s two predecessors. “Mr Machine [2011’s sophomore album,recorded with the a ten piece classicalensemble] especially was very planned and strict,” says Paul Frick. “We wanted to be more spontaneous this time. We wanted to do something very different, more dark and more rough. We wanted to write songs rather than tracks that slowly evolve.”

Another major difference is the appearance of a number of guest vocalists who had a big influence on the album’s direction. There are appearances from Jamie Lidell, Om’mas Keith (Grammy nominated producer of Frank Ocean’s Channel Orange, Kanye West, Jay Z), Gudrun Gut (Einsturzende Neubauten and German punk band Malaria!), Erika Janunger and Russian DJ and producer Nina Kraviz.

The album is accompanied by a new stripped-down live show: no ensemble this time, just the three protagonists and a specially-built stage set. The visuals will be created by Brandt Brauer Frick affiliated production company Park Bennett, which makes all of the band’s videos and is responsible for the overall visual concept for the album, inspired by Fluxus art of the ’60s.