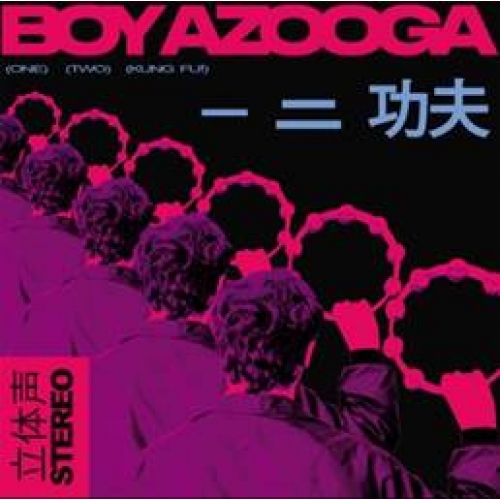 “The whole point of Boy Azooga is to be a celebration of loads of different types of music. I wanted the album to be more like a mixtape or something. We wanted to include loads of contrasting styles.” Well, Davey Newington, aka Boy Azooga, I’d say that you’ve whacked the nail firmly on the head there, as debut LP ‘1, 2, Kung Fu!’ is exactly that; a rich petri-dish of differing aesthetics. It’s a scrapbook of sorts, one held together by deft nuances and subtle textures but all bound together to make one sublime body of work.

Taking influence from the likes of Can, Black Sabbath, The Beach Boys, Outkast and Ty Seagall, to name a clutch of Newington’s key inspirations for ‘1, 2, Kung Fu!’, the Welshman’s debut was never going to be a cookie-cutter, out-of-the-box album, was it? Recent singles ‘Loner Boogie’ and ‘Face Behind Her Cigarette’ offer a peek into the world of Boy Azooga, like a beckoning finger to a landscape of lolloping grooves, hazy euphoric rushes and ample helpings of toe-tappin’ percussion. Once down the rabbit hole, those facets separate, evolve and coalesce, and then this cycle repeats itself as if ‘1, 2, Kung Fu!’ is its own living organism. ‘Loner Boogie’ harnesses Newington’s rambunctious side, with scorching garage-rock fretwork and a steadfast drum beat. It’s perhaps the most uplifting track about social anxiety you’ll ever hear, as Newington muses “went to a party/stood around and felt the fool/I tried getting busy/getting busy being cool”. While the end of the song is capped off by “I got the loner boogie and it’s coming for you/I’ve got a screwed-up heart and my heads fucked too” before letting off a primal howl. In contrast ‘Face Behind Her Cigarette’ finds Boy Azooga adopting a pulsing, psychedelic strut that bleeds into the rest of the album. It’s here where a throbbing bass riff and thudding percussion weave in and out of a staccato keyboard pattern, then when glued together injects some languid danceability to the album.

There’s a youthfulness to Boy Azooga’s debut that’s both heart-warming and melancholy. To the say the album is sepia toned would portray it as nostalgic and it some ways it is, although there’s still a freshness to ‘1,2, Kung Fu!’ that means it’s not a homage to the past, more of a hat-tip. With youthfulness comes escapism and midway through the LP, there’s a trio of tracks that seem to chronicle the hedonism of a night out. ‘Taxi To Your Head’s woozy euphoria writhes and wiggles under a technicolour haze as our protagonist murmurs “I love the way it feels when nothing seems quite real”, while ‘Loser in the Tomb’ reflects on a youthful manifesto, where it’s all about now, rather than looking to the past or into the future “we’re too busy making memories to remember who we are/always trying to find the line/but always go too far” all to the sound of another rich palette of colours, unfurling via the track’s cyclical guitar work and subtle off-kilter electronic motifs. Things come to a gentle halt with ‘Hangover Square’s dreamy fug, as if Newington’s trying to piece together what happened the night before, whilst ruminating “you wish you hadn’t got yourself in this big old mess”. Aside from the perils of a night on the sauce, ‘Jerry’s delicate, summery shuffle is the vehicle for Newington to romantically reminisce, but you get the impression the object of his affection is unaware of his true feelings “I’m just happy to be your shadow/walking in light/caught inside of the moment of time when our stars align”.

‘1, 2, Kung Fu!’ is brought to a close by the at first withdrawn murmur and then sonic explosion of ‘Sitting On The First Rock From The Sun’ – here is where Boy Azooga’s melancholic side merges with Newington’s lust for something more in your face; suffice to say the riff that brings things to close is positivity gigantic and just solidifies his hunger to produce something of “contrasting styles”.

As something of a mercurial talent, Davey Newington has crafted a stunning debut album with ‘1, 2, Kung Fu!’; this could be the start of something very special.