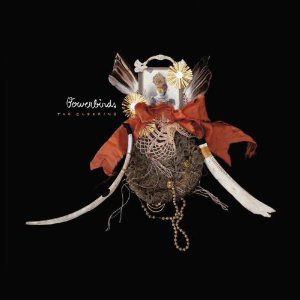 “Well the light was rust, and the cold was in our knees… and our breath poured out over golden fields.”
It’s lyrics like these that grace our first steps into The Clearing—the third studio album by folk darlings The Bowerbirds. An emotional journey from the bloom of young love to the ache of winter’s chill, each track is testament to the wealth and breadth of human experience.

This album resonates with the obvious camaraderie that exists between Phil Moore and Beth Tacular: only a couple with incredible closeness and a shared sense of wonder could create music like this. From delicate melodies to foot-stomping get-up-and-dance tracks, this album is poetry from beginning to end.
The opening of “Hush” is haunting and soulful, but with just enough piano trilling to keep the audience optimistic about the next turn the song will take. Meanwhile, the percussion created with drumstick-clicking and hand-clapping in “Stitch the Hem” added a rustic edge to the tune, heightening the energy of the album with a flamenco- like tempo.

“Death Wish” is a waltz through heartfelt lyrics and honey-sweet layers of orchestral accompaniment. The addition of violin to some of the songs works as beautifully on this album as it did on their Hymns for a Dark Horse debut, and lends an unexpected shine to the roughly-hewn edges within. Some parallels can be drawn between The Bowerbirds and other creative folk acts like Beirut, Tin Sparrow, The Decemberists and DeVotchka, but the ‘birds are far from pale imitations of these: their voice is their own. The North Carolina influences are apparent in the rustic, Appalachian lilts some arrangements carry, but in the purest and sweetest way possible. This is music to listen to when the damp heat of summer clings to the skin; a soundtrack for fireflies.
The Clearing sounds a bit more polished than their previous releases, possibly because of a greater sense of self confidence: Both Moore’s and Tacular’s vocals are stronger and less wavering, and the positivity that echoed through their earlier work seems to shine even more brightly now. As implied in the lyrics to “Tuck the Darkness In”, the Bowerbirds seem to have indeed sown their wildest dreams, and we are reaping the beauty that has poured forth from them.