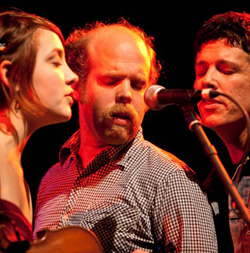 Recording What The Brothers Sang was something important for Dawn McCarthy and Bonnie “Prince” Billy. Having both been touched by the music of The Everly Brothers at a young age and Dawn’s own children finding joy within their music today, an Everly Brothers  song was also the first thing that made Dawn and Will sing together, ten years ago. Watch the recording process as documented by Lara Miranda HERE.

Due for release on February 18th 2013, What the Brothers Sang is a record only Dawn and Bonnie could make, and only in the room with the players that had come to join them; a fine bunch of musicians assembled whose combined session credits include hundreds of records and a stack of number one singles: Emmett Kelley, Dave Roe and Kenny Malone, with featured players Billy Contreras, John Mock, Dan Dugmore, Matt Sweeney, Pete Townsend, John Catchings, Bobby Wood, Joey Miskalin, Nils Frykdahl, Ian McAllister, Joey Baron, Dr. Chris Vivio, and Noah Tag.

Nashville legend David Ferguson recorded and mixed What the Brothers Sang with a great spirit of collaboration, support and exaltation at the city’s Butcher Shoppe Studio. Lara Miranda discusses being immersed in this environment:

“Maybe it was the Butcher Shoppe’s cozy decor and model train set, but shooting in the studio that week felt like entering a realm of childhood. There was this family created for a short time, with an amazing range of characters, ages and emotions, intimacy and hilarity all over the place- crystal clear moments of magic- and then it was over. My sadness at leaving that world was only consoled by us all going to get ice cream afterwards.”

What the Brothers Sang is a beautiful and humble tribute to Don and Phil, a powerhouse of songs from The Everly Brothers vast repertoire they wanted to sing and bring forth to share again, fifty years later.