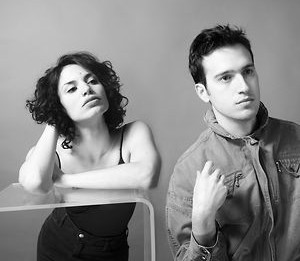 The band is also proud to announce their November residency at The Satellite in Los Angeles, which includes their record release show on November 4th. Full tour dates listed below. Body Parts mobilizes a singularly elegant experimental pop idiom to explore the contours of modern devotion and doctrines of self-improvement alongside the immoderate reverberations of remembrance.

Weaving together influences as varied as the rationalist prescriptions of the self-made seeker-healer- Scientology mastermind L. Ron Hubbard, the sensual guitar-scapes of Prince, and the haunting vocals and surrealist melodrama of Kate Bush, Ryder Bach and Alina Cutrono form the group’s core. Less life coaches and more exquisite shamans, Bach and Cutrono announce attentively written modern mantras in strikingly rich and complex vocal harmony. Bach’s lyrics pit the therapeutic logic of contemporary self-help narratives against the persistence of the more ancient and uncontrollable imperative of fate.

The late modern drama of their debut album, Fire Dream, out October 29th via Father/Daughter Records, has its genesis in an enduringly powerful nightmare in which Bach witnessed the murder of his parents at the hands of a close friend. Dealing less with the dream itself than with the inescapable influence of the fabricated memory over lived reality, the album moves the listener carefully through the terrain of the misremembered, forgotten, and unforeseen.  The sonic depth and diversity of Bach’s composition, arrangement, and production of this consummate suite of music emerges by virtue of Proudfoot’s engineering prowess and the expert mixing of Eric Palmquist. Trying to resist the tidal pull of Fire Dream’s peculiarly beautiful world would be like trying to beat fate.