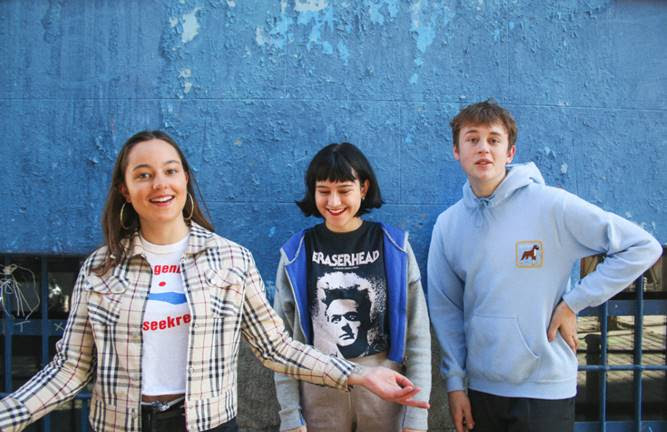 Talking about the track, the band said: “‘Blue Suitcase’ is a track that was mostly written over the last few days of summer, inspired by events, discussions and ‘philosophical’ musings that took place in the studio during the recording of the album. We wanted to completely let loose with the track, combining psych- garage wig outs with elements of our favourite disco and dance boogie tracks, such as Luther Davis Group’s ‘You Can Be A Star’ and Rita Lee’s ‘Chega Mais’. The lyrics also fuse together an anecdotal story of spotting an unaccompanied case on a train platform, and the allegorical discussions and theories that followed. This included topics ranging from Schrodingers Cat to James and the Giant Peach!”

“Blue Suitcase (Disco Wrist)” was recorded during the album sessions at Eve Studio in Stockport in the late summer of 2017 with producer Marta Salongi (Bjork, Insecure Men) and follows the release of previous tracks “Let Your Dogtooth Grow”, “I Only Bought It For The Bottle” and “Sugar Tastes Like Salt.”

Once the best-kept musical secrets in and around their native Halifax, the teenage trio are poised to charm their way beyond UK borders courtesy of their debut release for Heavenly Recordings.

“We met Henry at a house party a few years ago,” says Sid about the beginnings of the band. “I mean, it’s a bit lamer than that sounds. It was a friend of our parents, she was having a 40th birthday party, and we went along, and Henry was there too, with his parents.” They’ve been writing songs together ever since, Esme singing and on bass, Sidonie on drums, Henry on guitar.