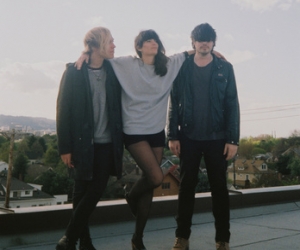 Captured Tracks has announced the release of Blouse‘s sophomore album, Imperium, due out  September 17th.

For this follow up to their self-titled debut, Blouse has discarded the synths and unplugged their instruments, translating into a more upfront and assertive Blouse. Throughout the record there is a careful balance between the urgency created by kinetic guitar rifts and driving bass-lines and the fragile sincerity of Charlie Hilton’s billowy, Nico-esque vocals. The result is a vague sense of familiarity that is comforting, but all the while surprising.

Evolution is a tricky word when discussing current trends in music, especially when it comes to sophomore albums. The critically lauded BLOUSE, the 2011 debut from the Portland band of the same name was a lush, melodic and dreamy affair spiked with whoozy synths and delicate vocals. For Imperium, their 2nd LP for Captured Tracks, Blouse have shed the synths, done away with drum machines and wrote and recorded with “instruments that don’t plug into the wall,” as enforced by band member/producer Jacob Portrait.

Sonically speaking, that comes through on the LP immediately. Perhaps bolstered by the ongoing construction occurring next to the studio while the record was being made, the sense of force and urgency propelling the record is evident. Patrick Adams’ driving bass and plodding drums in the title track usher in this new guitar-friendlier Blouse; more direct and clearer of vision, but still mysterious and beautiful.

But these interruptions aren’t a bad thing, they’re what makes Imperium the great record it is. “In a Feeling Like This” describes it perfectly; it’s a strange place that you’re weirdly familiar with. Warm but also kind of spooky and imposing.
Imperium is out Septmeber 17th, 2013.