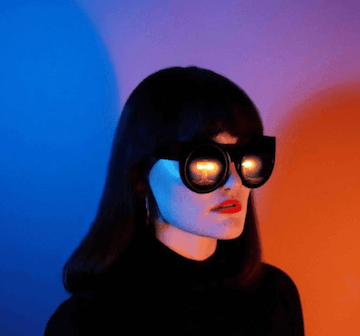 17 years together and six albums down (with the odd EP and rarities release to add to the mix) Brighton two-piece, Blood Red Shoes have earned the right to do whatever the fuck they want. By their own admission Laura-Mary Carter (guitar/vocals) and Steven Ansell (drums/vocals), have never fitted in and for them that’s the way they like it. “We’ve always been outsiders right from the very beginning” says Ansell when looking back on nearly two decades as a band and musing over the origins of their new record ‘GHOSTS ON TAPE’.

“This album is really about us asserting ourselves as our own little island. We have made an entire career out of being told what we are ‘not’, of being rejected, of not fitting in, and this album is us deliberately pushing into all of our strangeness, emphasising all of the things that make us different. Ultimately this album is an invitation. It’s us saying this is our world, these are our darkest thoughts and feelings – our ghosts – caught on tape. You are welcome to join us. Come and embrace the strange.” Proton packs at the ready, we’re going on a ghost hunt…

‘GHOSTS ON TAPE’ is by far Blood Red Shoes’ most diverse and strangest record to date. 2018’s ‘Get Tragic’ found the twosome jumping into broader sonic territories and for their new offering, this is a greater leap. It’s not a total evolution, their bratty garage-punk-flecked noise makes the occasional cameo but it’s usually followed or accompanied by a spectral synth, some crunching electronics or something that invokes haunted mansions and the tension of a horror-film. ‘MORBID FASCINATION’ is akin to rock and electronica locked in an arm wrestle but perpetually held in neutral, thanks to its huge drums, pulsing digital tones and driving guitar gnaws. ‘GIVE UP’ bares it’s fangs via Ansell’s acerbic vocals, urgent beats and constant transistor radio fuzz. Although, to rubberstamp the LP’s penchant for weird, the track slithers into a spooky chorus, led by ghoulish synths before the song climaxes into a calm, euphoric state. Its evident Carter and Ansell have fully embraced an ‘anything goes’ mind set with their latest release, which is clear from the off. Opening track ‘COMPLY’ resembles NIN’s ‘Hurt’ (a lofty comparison I know!), due to its creepy, expansive soundscape that commences with murky piano keys and eventually roars to a spine-tingling finale, with Ansell bellowing he “won’t back
down”. A sinister glint is something that reoccurs throughout ‘GHOSTS ON TAPE’, as heard in ‘BEGGING’s lumbering pace, like a predator tracking its prey. A song that slithers with menace is ‘MURDER ME’; fuelled by a woozy synth tone, Carter’s aloof purr and a shadowy twang. The eeriness is punctuated by the choice lyric “I’ve been watching you” which openly sounds like a stalker-esque threat. The same kind of melancholy and juxtaposition orbits ‘SUCKER’s dirty guitar lines, spacey electronics and its slow and steady beat. Carter trills “I’m a sucker for your love/will it ever be enough?” like someone questioning their position in a relationship,
rather than celebrating a loving union.

There’s a rage and vulnerability to ‘GHOSTS ON TAPE’; on the flipside to ‘SUCKER’s yearning doubt, you have ‘I AM NOT YOU’s fuzzed up attack that boings like a rusted, coiled spring through shifting quiet/loud dynamics. A broad sound populates ‘DIG A HOLE’, as a celestial hue cloaks the acidic wordplay of “I’ll make you wish you’d never been born”. ‘I LOSE WHATEVER I OWN’ comes out stomping like glam-rock from 2150 but imagined from the 1950s. The song grooves with a seductive coo, as electronics, guitars and drums establish a fruitful middle ground. Carter reflects on her current situation “I’ve been wasted for far too long” before declaring “I’ve got my suitcase packed/just to get you off of my back”.

If this is an invitation to Blood Red Shoes’ weird world, I’ve already RSVP’d. 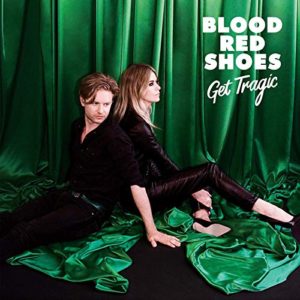