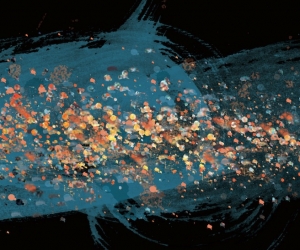 With speculation rife, this new EP by Bloc Party, Nextwave Sessions, could be the last thing we hear from the four piece. It could be forever, it could be another elongated period of non activity, as it stands the London troop are putting Bloc Party on ice again, for how long, no-one knows.

With such uncertainty it’s difficult not to listen to Nextwave Sessions EP like it’s some kind of farewell letter, the five tracks that act like a sonic montage of what’s come before; each little nugget invokes a Bloc Party song from their sublime back catalogue. Opening gambit, ‘Ratchet’ is the not so distant relation to ‘Mercury’ thanks to its elastic bounce and Kele Okereke’s swaggering rapped delivery. The EP is kick started with an assured confidence with Okereke spitting “make it count” constantly amongst soundbites about “smoking all my homegrown” and other rude boi licks. The jittering dance-punk is then followed by the minimal sounding ‘Obscene’ that invokes the synthetic direction of ‘Biko’ from the band’s third LP, Intimacy. Skittering beats and subdued synths make up this skeletal track which in fairness could easily sit on Okereke’s solo effort, The Boxer. Here’s where the first hints of a “goodbye” crop up with the frontman tenderly stating “we both know that this love was never right”. A reflective notion about a tumultuous relationship or a metaphor centered around the band calling it quits? Interpretation is redlining throughout most of Nextwave Sessions.

The post punk of ‘French Exit’ takes you back to the heady days of 2004/2005 when Bloc Party were whip cracking staccato pups on the campaign trail for debut LP, Silent Alarm. This angular vignette is akin to fan favourite ‘Skeleton’ due to the off-kilter drumming and jagged fretwork. ‘Montreal’ takes Bloc Party back to a more ethereal spectrum with waves of incandescent noise drifting over low key yet frantic drumming. Aesthetically ‘Montreal’ carries a similar vein to ‘Plans’ or a less anthemic ‘This Modern Love’, all from Silent Alarm. Again nuances about separation and abandonment rear their heads with Okereke coolly uttering “It’s not my home anywhere/and they made it perfectly clear”. Is this a reference to when the rest of Bloc Party supposedly ditched Okereke with the idea of recruiting a new vocalist? Argh! The uncertainty is infuriating!

The final track ‘Children Of The Future’ echoes the same aural blueprint as ‘I Still Remember’ with it’s straight forward indie anthemic direction. There’s no electronica here, nor is there any visceral or angular fretwork. For a possible final statement from Bloc Party the EP finishes on a mawkish ebb with Okereke proclaiming “children are the future” in what seems a completely non-ironic way. It’s a little bit schmaltzy until the music drops and the ”lump in your throat” lyrics of “be all that you can be/be all we never were/succeed where we failed” make a full stop even more apparent. How could this not be taken as a final statement?

Let’s hope this isn’t the end but if it is, Bloc Party…it’s been emotional.