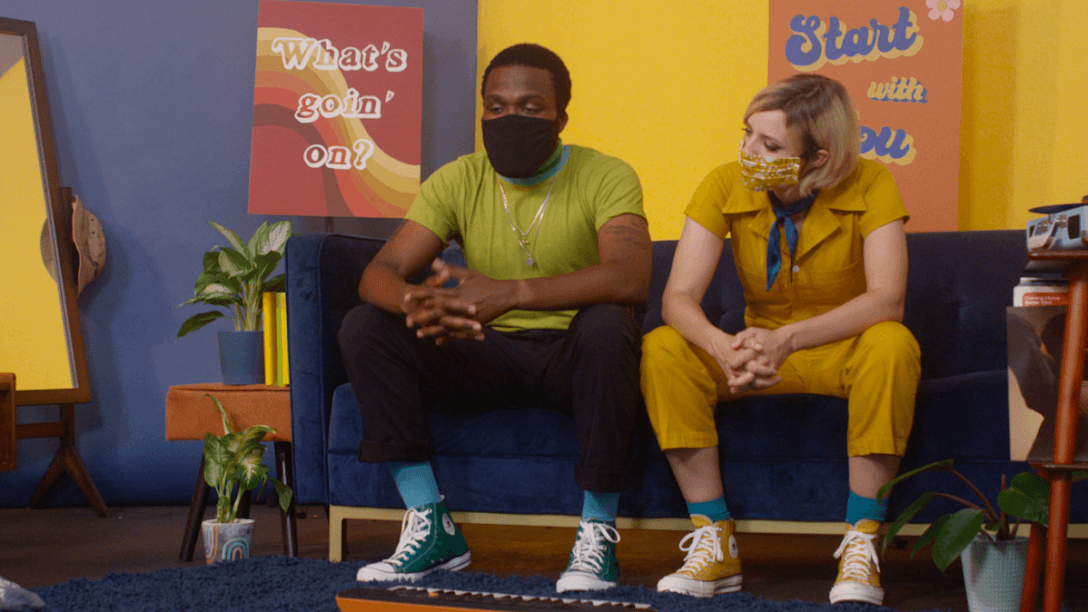 Blaire Michael & Lew Salem "Start With You."
Share on TwitterShare on PinterestShare on PocketShare on RedditShare on FacebookShare on Email

Blaire Michael has released a new single with San Diego rapper Lew Salem, entitled “Start With You”. Today, they have debuted a new video for the track, directed by Los Angeles artist Nico Turner (Cat Power, Vincent Gallo) along with the track on September 18th.

“Lew & I met when I was living in San Diego and first started getting into music production. I had sort of serendipitously met an audio engineer in a coffee shop and he was opening Gold Standard studio later that week. I went to the opening party and ended up meeting Lew, who shared my love for a single, dangling earring reminiscent of early George Michael. We started meeting up at my place to work on songs together and found the process so easy and seamless that we continued the trend even after I moved to LA. “Start with You” will be our second release as a collaborative team and we couldn’t be more excited to share it with the world. This song and its message mean so much to both of us. This beat for “Start with You” was actually one of the first beats I created when I got my NI Machine Mikro. The beat had just been sitting, waiting for the right arrangement, for over a year before I picked it up during quarantine. I had called it “Happy Vibes” because it just had this sort of light, bouncy vibe to it and it seems to keep jumping out at me in my very unorganized catalog. I finally dusted it off, arranged it, and handed it to Lew and asked him write something inspirational and uplifting. I wasn’t prepared for the magic that would be the “Start with You”. We worked long distance to hone the melody and track the vocals. I mixed it and had it mastered by Wes Osborne at Violet Lantern Mastering whose worked with the likes of Kyle, Kehlani, Lil Yachty, Anderson .Paak, and Tokimonsta. Once we had the song and heard how amazing it had turned out, we knew we needed to put all our cards on the table and plan a music video to be released with it. I built my vision and co-directed the video with Los Angeles creative and multi-hyphenate, Nico Turner, who also shot and helped to design the cover art.”

“The process began when Blaire sent me the instrumental for Start With You back in late April/early May, and asked if i’d be down to write lyrics to the track. She gave me her vision for the song: an upbeat song with inspirational lyrics, as the world was in full-blown quarantine at the time. I wrote the pre-chorus and chorus first based on the melody of the song, and drew inspiration from Kid Cudi in stacking the vocals. I take walks in the neighborhood on my lunch break, and I honed in on the feeling of being in the same routine and feeling the need to break out, something that we all were feeling at the time. The theme of changing habits was all drawn from personal experience and books i was reading at the time that were inspiring growth and change in myself. Originally we were going to do a simple quarantine-style video, but as the song was being wrapped up we decided it deserved a more proper treatment. I suggested working with Future’s Past Studios based here in San Diego, and after a couple meetings we ended up shooting the video in early August. Blaire and Nico absolutely crushed the concept and direction, and it’s the biggest production i’ve been a part of in my career thus far. Overall, I’m hoping that the song just inspires people to look inside themselves for the change that we want to create, and to take action in becoming educated on worldly issues/ideas.”

Blaire Michael is an electronic music producer and artist located in Los Angeles, California. Born and raised in Memphis, Tennessee, her upbringing was set to an eclectic playlist of blues, soul, and rock and roll music. This music stayed with her as she moved around the country in pursuit of various graduate degrees. Music production and songwriting had become her escape during graduate school, an active therapy that allowed her to smooth the rough edges of life. After finishing her PhD in Geography, she realized she needed to give more breath to her creative voice. Now, she is a member of the new wave of female producers challenging the status quo in the mostly male-dominated music industry. She takes a spontaneous, playful approach to crafting sonic palettes, each with their own unique flavor. You’ll find hints of her musical upbringing in her Alt-R&B sound and soulful voice.

Lewis Quran Martin Holloway (born March, 6th, 1993) a.k.a. Lew Salem, is a San Diego rapper and producer. Raised in the Mira Mesa neighborhood of the city, Lew took an early interest in all things educational, and eventually this love of knowledge led to a passion for the creative arts. Beginning with drawing, he began experimenting with various creative fields, including graphic design, video editing, and music. Ultimately music would take hold of his focus as a result of making parody songs with his friends in the summer of 2011, where he discovered a penchant for songwriting. In the years that followed, Lew would take cues from another rapper on the rise, Tyler, the Creator, in learning how to produce in addition to writing lyrics.