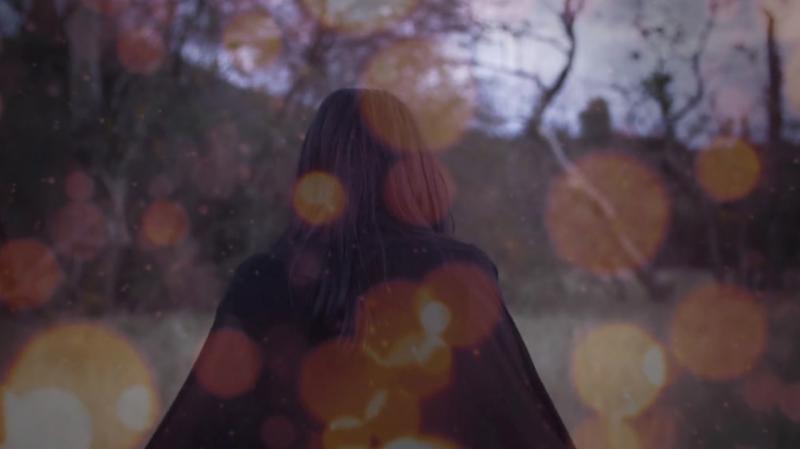 Today The Black Ryder shares “Seventh Moon” — the first film from the band’s forthcoming album, The Door Behind The Door, which takes us into a waking dream, a world between worlds.

“We wanted to create a visual accompaniment that would stir the viewer’s imagination as well as compliment the atmosphere of our music. Moving through a space between the veils, an ethereal dreamscape unfolds, a door behind a door.” -Aimee Nash

Says vocalist / songwriter Aimee Nash “Since releasing our first record we left Australia, toured America, relocated to Los Angeles, all the while trying to find our feet & get somewhat settled enough to write & produce this record. It also took some time to find the right scenario for releasing our music as well.”

“We wanted to create music that was layered, emotive & majestic,” says Nash. “You open one door, and you find there’s another, you keep moving through each door to the next not quite sure where you’re going or what to expect, but there’s something enticing & reassuring you that you’re moving in the right direction.” “The final track listing order was very deliberate, each track would morph into something completely different,” adds Von Ryper. “The whole idea is that it is a journey where, as a track finishes, one door might lead to ascension, whereas another may be a descent.”

Due to the deeply personal nature of The Door Behind The Door’s creation, Nash and Von Ryper are taking the reins for its release, putting it out worldwide on the band’s own imprint The Anti-Machine Machine in conjunction with The Orchard. After working with EMI Music Australia and Mexican Summer to release Buy The Ticket…, the duo decided to self-produce and release The Door Behind The Door in an effort to preserve the album’s uncompromised genesis. “We have a very specific vision for what it is we want to do here,” Nash says. “We had to keep moving & creating & evolving until we found the right fit as we saw & heard it. From the music production to the artwork & imagery, to wanting to release this on our own label, to the live performance.”

“We’ve been hands on in all facets of making & releasing our music. This approach may have taken more time to get to this point where we are finally releasing our music, but as the pieces are falling into place it’s quite a wonderful feeling knowing that our imaginations have brought us here to now with an album that we’re both proud of.”
-Matt Diehl

The Black Ryder
The Door Behind The Door
(The Anti-Machine Machine)
Street Date: Feb. 24, 2015

1. babylon
2. seventh moon
3. the going up was worth the coming down
4. let me be your light
5. santaria
6. throwing stones
7. all that we are
8. until the calm of dawn
9. (le dernier sommeil) the final sleep