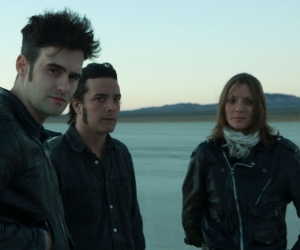 Black Rebel Motorcycle Club and independent film, art, and music collective Transistor Six debut the new video for BRMC’s ‘Hate The Taste’, the latest single from their sixth full-length album, Specter At The Feast (out now via Abstract Dragon).

Austin, Texas-based Transistor Six teamed up with Black Rebel Motorcycle Club at their April 26, 2013 performance at Austin’s Psych Fest to create a twist on a live performance video for ‘Hate The Taste’, based on their mutual aesthetic and appreciation of vintage, analog sounds and images. Watch it above.

“All the guys down at Transistor Six were inspiring to work with,” commented BRMC’s Robert Levon Been. ”They believe in shooting most of their film and photography with classic, vintage film camera’s and creating more organic visual effects rather than using the typical modern digital bullshit (that of course makes life way easier, but also more clean and predictable). We liked the Transistor Six concept of contrasting those two worlds, which is, in a lot of ways, the spirit of what the Festival is all about. Playing Psych Fest just became the perfect time and place to work together to try to capture the song and the feeling in the air at that moment. I hope people like what we’ve made by merging all these different elements together. Long live psychedelic rock’n’roll, and death to all DJ’s…. ‘i hate the taste but i carry on believing.”

“For the kind of analog films and photos we do, Black Rebel Motorcycle Club fit right in,” said Transistor Six founder Cory Llewellyn. “Our production team came up with the concept to have a force field encapsulating the band in the 60’s while the modern day audience outside were digital. We are always looking to push the boundaries a bit with photos and films and we were really psyched to be able to do that with one of our favorite bands.”

Transistor Six’s team filmed BRMC performing “Hate The Taste” with both Super 8 and digital cameras including a gigantic and entirely hand-built drone that had to fly 300’ over the crowd to capture footage of the audience. The tension between the crisp, colorful, digital images up against the phantom, almost holographic Super-8 ‘force-field’ surrounding the band on stage creates an otherworldly visual experience that marries music and film in a uniquely singular way.