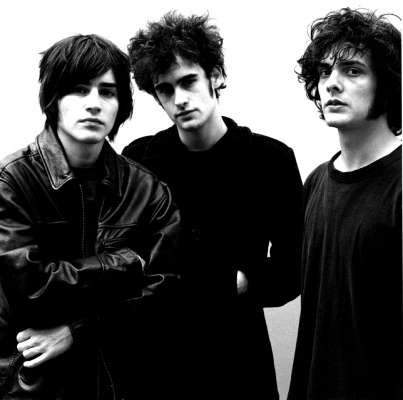 In the first official video to come from their storming new album, Specter At The Feast, Black Rebel Motorcycle Club have lent uplifting visuals to their cover of The Call’s ‘Let The Day Begin’, combining carefully chosen footage that depicts all walks of life. The band’s take on the song pays tribute to the late Michael Been of The Call; father of guitarist Robert Levon Been and long regarded as the ‘honorary fourth member’ of BRMC, who passed away in August 2010.

Black Rebel Motorcycle Club have just released their highly anticipated sixth studio album ‘Specter At The Feast’, via Abstract Dragon Records. Following 2010’s ‘Beat The Devil’s Tattoo’, the release is the latest addition to their acclaimed discography, which began with their seminal debut ‘B.R.M.C’ in 2001.

The notoriously mysterious trio remain true to their sonic template – fuzzy guitars, blues licks, atmospheric feedback – yet drew inspiration from a very different place for this new release. In August 2010, the band unexpectedly and tragically lost someone they often referred to as their fourth member, Michael Been, also bassist Robert Been’s father.

After taking some time off BRMC returned to their roots, their love of making music, and recalled their very first album as a reference. They recorded the majority of the album at Dave Grohl’s studio in LA on the same console that is featured in Grohl’s upcoming ‘Sound City: The Movie’ documentary (also the same board they recorded their debut album on). Additional recording was done in Joshua Tree, CA at the infamous Rancho De La Luna Studio before they ventured to Robert Been’s hometown of Santa Cruz, CA to record the rest of the album.

“This record took a long time to pull together,” explains Robert. “I think we all reached the breaking point after our last tour and needed to step back for a bit. These songs brought us back to life and gave us a second chance. I’ve never been more excited to play an album live before, these songs were born to be loud”. Since the band’s debut release in 2001 Black Rebel Motorcycle Club have released five highly regarded studio albums, released two live DVD’s including 2010’s ‘Live in London’ and toured relentlessly across the world.