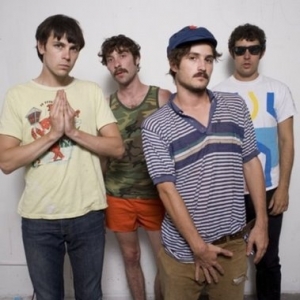 Atlanta’s favorite sons Black Lips have announced the impending release of their first full length in three years, Underneath the Rainbow March 18th on longtime label Vice Records. Recorded at a variety of locations over the course of 2013, the twelve songs boast a stable of studio collaborators whose pedigree speaks to how much the band has grown and sonically matured over the course of their 15 year long career. After handwritten letters to incarcerated studio legend Phil Spector to produce went unanswered the band convened at Dunham Studios in New York to record initial tracks with Dap Kings music director Tommy Brenneck (Cee Lo, Charles Bradley). The group then decamped to Nashville to record several songs with Patrick Carney of The Black Keys producing, finally rounding out the album with a couple of songs co-produced with lifetime Lips recording collaborator, Ed Rawls. The resultant collection was mixed by Grammy winner Jimmy Douglass (Justin Timberlake, Snoop Dogg, Björk) and features artwork shot by legendary photographer Mick Rock (David Bowie, Queen, Lou Reed).

Since the release of 2011’s Arabia Mountain, the band have been a live fixture worldwide, including festival appearances at Coachella, Bonnaroo, Lollapalooza, Primavera, All Tomorrows Parties, Austin City Limits, as well as positioning themselves as international music diplomats via tours in Thailand, Turkey, Australia, and a highly ambitious, ground-breaking tour of the Middle East (which was the subject of an NPR All Things Considered piece as well as a feature length documentary Kids Like You & Me). Additionally the band is currently collaborating with French brand APRIL77 on a line of denim jackets set to launch Spring of 2014, and have interesting plans involving fragrances in the works. The tour schedule for the new album will be characteristically extensive, with a New Year’s Eve show this month in Atlanta and an imminent headlining tour in March following their appearance at SXSW. Full dates to be announced soon.

UNDERNEATH THE RAINBOW FULL TRACKLISTING