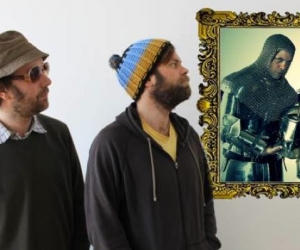 Share on TwitterShare on PinterestShare on PocketShare on RedditShare on FacebookShare on Email
Neil Halstead, Mark Van Hoen, and Nick Holton of the newly-formed Black Hearted Brother will release their debut album Stars Are Our Home on October 22nd on Slumberland Records.  The album is available for pre-order now in the Slumberland Online Store. “This Is How It Feels” is now available to listen on SoundCloud. Black Hearted Brother’s Neil Halstead told Rolling Stone, “‘This is How It Feels’ was one of the first tracks we worked on together. Nick Holton and I originally started working round a keyboard riff that came from somewhere else an old tune or demo, not sure, but it fitted with a bass line  Nick had been playing around with. The chorus was the first part that came together and as with all the tracks on the record it evolved into it’s present form over quite a period of time.”

An experimental album, Stars Are Our Home boasts the craftsmanship of Halstead, Van Hoen, and Holton’s impressive resumes: Neil Halstead, previously an influential member of Slowdive and Mojave 3; Mark Van Hoen, an original member of Seefeel, subsequently working solo and as Locust; and Nick Holton, the main mover behind Holton’s Opulent Oog, and member of Coley Park, who have released albums on Halstead’s Shady Lane label. They had also previously worked together on Halstead’s 2001 solo album, Sleeping On Roads, though Van Hoen also co-produced Mojave 3’s Out Of Tune (1998), Excuses For Travellers (2000) and Spoon & Rafter (2003), while Holton took up production duties for Halstead’s Palindrome Hunches (2012). Van Hoen and Halstead go back much further still, to 1992, when they were in Seefeel and Slowdive respectively.

Stars Are Our Home mirrors the similar experimental nature of Halstead’s previous work – he describes the album as, “a lot of very long and indulgent space rawk.” The space-rock elements of the album are obvious in the album’s opening title track, but Halstead says there’s more to it: “The idea was to just make a record that was in some ways ‘unedited.’ To not worry about a particular sound or style, but to just go with the flow. We all make quite focused records individually so, as Mark says, it’s our ‘guilty pleasures’ album.”

A record that merges “order” and “chaos”, Stars Are Our Home is full of unexpected twists and turns that drench the listener in noise and then flip back to acoustic melody, and offers surprises with lyrics that sometimes reference romance and other times UFO abduction. Although unexpected and surprising, the experimental nature of the album never forgets the importance of pop with tracks like, “Take Heart,” “I’m Back,” and the closing track, “Look Back Here They Come.”

Black Hearted Brother will announce U.S. tour dates in support of Stars Are Our Home in the coming weeks.

1. Stars Are Our Home

5. If I Was Here To Change Your Mind

7. Time In The Machine

10. My Baby Just Sailed Away

12. Look Out Here They Come