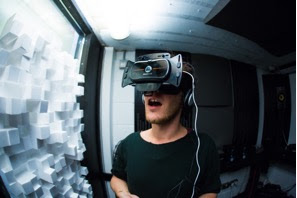 Shot on location in Iceland by award-winning director Andrew Thomas Huang with his VR production company Vrse.works, “Stonemilker” is now available as a 360° Virtual Reality app.

The mobile VR delivery platform was integrated and pieced together by Third Space Agency and digital production specialists Rewind and 3Dception real-time binaural/3D audio engine specialist 2 Big Ears The piece presents a 360 degree world in which Björk performs the haunting track from her record Vulnicura.

Björk’s “Stonemilker” explores the possibilities that Virtual Reality holds for performance platforms outside of the traditional music video world. The video launched earlier this year on the new You Tube 360 player and is now available to early adopters with VR headsets on iPhone and iPhone viewers.

Of the film, Björk says;

“this came about as a spontaneous fruit of mine and andrew huang´s collaboration. We found ourselves in Iceland one day with nothing to do and a 360 camera lying about . We discussed its potential for intimacy and Andrew then suggested we take it to the beach where the song was written. It immediately rang true for me as that location has a beautiful 360 panoramic view which matches the cyclical fugue like movement in the song. If the song has a shape it is sort of like a circle that just goes on forever.”

“We captured “Stonemilker” in November on the westernmost tip of Reykjavik, an island called Grótta on the Seltjarnarnes peninsula, which is the very site by the lighthouse where she wrote the song and recorded much of Vulnicura. After arriving in Iceland with a variety of camera gear and open minds, and after my in-depth conversations with Bjork at her home about the circular nature of the song, we spontaneously decided to shoot aperformance of “Stonemilker” on the beach where it was written, using the 360 Vrse.works camera with the intent of capturing an intimate performance for virtual reality in the round.

Because of the all-seeing nature of this camera, my whole crew and I ducked behind boulders, leaving Bjork alone with the camera, not knowing what we would be ultimately capturing. All I remember is staring at the pearlescent purple seashells beneath my feet throughout the takes listening to her strings reverberating against the wet tidepool rocks, popping my head up occasionally to steal glances of Bjork in her duet with the camera.”