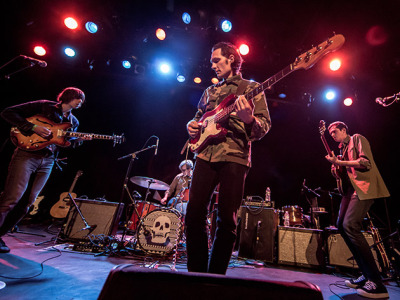 Ultimate Painting, the duo of Jack Cooper and James Hoare, have announced the release of their new album, Dusk, on September 30th via Trouble In Mind. Recorded to tape by James in his East London flat and home studio, Dusk is the third album from the London-based duo, a ten song set that expands the group’s sound from their self-titled debut and their sophomore effort, Green Lanes. Today, the band shares the first single, “Bills.”

Ultimate Painting are lucky enough to be comprised of two singular voices in Jack Cooper and James Hoare, who met when on tour together with their other bands Mazes and Veronica Falls. The pair’s distinctive songwriting styles began to blur with Green Lanes, but on Dusk it’s hard to tell where Cooper ends and Hoare begins. Their tunes weave in and out of each other like the duo’s respective six-strings, spiraling around each other in a laconic dance.

The casual setting during the album’s recording allowed the sessions and songs to unfold naturally, with James and Jack accompanied by recent live drummer Melissa Rigby, who drums on the entirety of Dusk. Her skills lend a rhythmic elasticity to the songs with jazzy undertones that break from the band’s previously unadorned 4/4 leanings. Dusk feels different and cements the group’s presence in the modern world of guitar pop, finding voice in the allure of quietude.