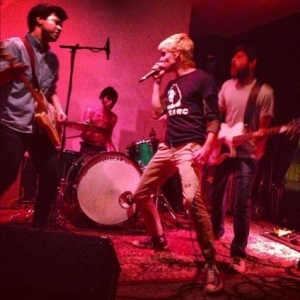 Big Ups have premiered their first official video for the single “Goes Black” which you can watch right above. Their debut album Eighteen Hours of Static is due out January 14 on Dead Labour (US) and January 13 on Tough Love (UK).

The video was directed by Sean Stout, a New York-via-Sacramento-based videographer, director, and editor who has been creating videos under his TerrorEyes moniker since he was a teenager. His resume includes videos for the likes of Trash Talk, Death Grips, Chelsea Wolfe, Russian Circles.

Brendan Finn, Joe Galarraga, Amar Lal, and Carlos Salguero Jr. met whilst learning about specifications of Cat 5 cables in New York City. Shortly after, they formed a band. Big Ups – since 2010 – blend punk, post-punk, metal, and indie rock into a salty mash that gets stuck to the roof of your mouth. At their brightest, they have been likened to The Descendents, but at their sludgiest, they call to mind bands like Pissed Jeans and The Jesus Lizard.

Eighteen Hours of Static was recorded by Charles DeChants in the rock ‘n’ roll labyrinth known as Excello Recording in Brooklyn over three days. The album highlights Big Ups’ depressive mood swings. The band slows their usual frantic pace on the burner “Wool” – a song about dealing with suffering. They toy with dynamics on aggressive tracks like “TMI”, “Little Kid”, and “Fresh Meat”. But not to worry – the mania is still there; songs like “Goes Black” and “Atheist Self-Help” demand attention with their sneering guitars and colossal drums. Lyrically, the album is a meditation on subjects like truth, faith, and science (the record’s title is a reference to Carl Sagan’s Contact), but admittedly, Big Ups doesn’t necessarily have all of the answers.