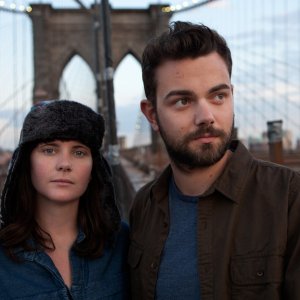 Barsuk Records has released Big Scary’s new video for “Twin Rivers,” off their Twin Rivers EP, released today via digital retailers, and from their upcoming album Not Art, out January 28, 2014. According to director Shaun Garland, the intricately shot video “is a story of a praying mantis living in the perils of a modern world. The praying mantis in the video is played by Florence. On set the crew would wait patiently for her to move into a good position or give a look with personality. She performed like a star and even gave the unplanned-for scene by continually moving towards the window, which created the most poignant part of the story.”

Today, the band released their Twin Rivers EP, which is available at digital retailers everywhere. In addition to two tracks off Not Art, the EP features remixes by The Antlers, Menomena & Dan the Automator. Menomena’s take on “Luck Now” does all of those things and so much more.” Also featured on the EP is a “Twin Rivers” remix by Dan the Automator and a collaboration with Jonti called “Slumming It In Paradise.” You can listen to the entire Twin Rivers EP at http://www.barsuk.com/twinriversep

The story of Big Scary begins in Melbourne, Australia, where duo Tom Iansek and Jo Syme, armed with just acoustic guitars and egg shakers, started playing songs together in the living room of Syme’s parents’ house, gradually working up to a bolder, more expansive sound by incorporating electric guitars, drums, synths and piano. What began as a few rainy day acoustic ballads in their first incarnation soon grew, and before long, the newly named Big Scary were writing anything they pleased-fuzzed-out garage rock; piano-led pop; intricate, pastoral instrumentals-each imbued with an effortless pop sensibility and lightness of touch.

On the heels of their adventures abroad, an invigorated Tom and Jo returned home and began recording their second full length album. Grappling with the pressures and perceived responsibilities of their Australian success, the daunting goal of bringing their music to wider audiences, and their own expectations of themselves as writers and creators, the band eventually settled into making an album that would be, paradoxically, hotly anticipated at home while acting simultaneously as a first introduction to almost all audiences elsewhere: Not Art.

2. Slumming It In Paradise (ft. Jonti)

11. Final Thoughts, With Tom and Jo