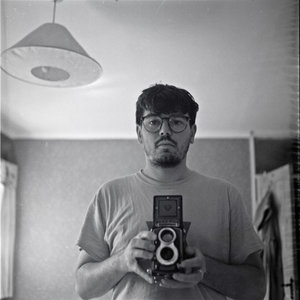 Ahead of the release of his album Silver Wilkinson on May 14, Bibio reveals a video for ‘À tout à l’heure.” The video, directed by Bibio and editied by Russell Weekes, features Bibio in silhouette, alongside various animals and instruments, interlaced with over 13 years of footage filmed by Bibio himself.

“Many years ago I was in Wolverhampton library looking for music to take out. I was in the cassette section and there was an album cover which stood out to me – it was the self-titled album by ‘Free’. The cover is of a blue sky and a naked woman’s silhouette striding over the camera. Her silhouette is transformed into a hole in the sky showing the stars, or perhaps a ‘window’ onto the heavens. This beautiful image was created by Ron Raffaelli.

I’ve been in love with this image ever since. I’ve wanted to try out techniques to achieve things similar to that album cover for a long time, such as layering negatives – which is how I imagine that image was created… although I could be wrong.

I love the idea that the silhouette of the woman is a ‘window’ onto the stars, it got me thinking that any silhouette could be used in a similar way.

When I finished Silver Wilkinson and the artwork, it was time to start work on the video. I contacted Russell Weekes to ask if he would be interested in collaborating with me.

We hired a studio in Birmingham so we could easily transport my gear from my home in Wolverhampton. We also hired a turntable for me to stand on so I could be videoed rotating. We shot all the silhouette footage against a white wall on my DSLR. Russell’s imagination really shone through here because he seemed to have all sorts of wonderful ideas on tap. I recall him going to a local shop to get us biscuits for our tea break and came back having thought of even more quirky ideas. We shot lots of variations of the silhouettes with different instruments. After the shoot, I then made necessary adjustments to all of the clips and sent them to Russell to cut to the music.

The next stage was to replace the background and silhouettes with 8mm film footage which I had shot over the last 13 years. I sent off all of my reels of film to be transferred to a digital format and when I got them back, I worked them into Russell’s edit using luma key and chroma key techniques. One thing I love about Raffaelli’s image is the warm, grainy 60s psychedelic look to it, so I decided that my backgrounds and silhouette ‘windows’ should be looking onto warm fuzzy scenes captured on genuine film – I’m not a fan of fake film filters, when you see real super 8 footage you realise what those filters lack. I was super happy with the result, it felt like a long-term ambition fulfilled, but not necessarily a closed book”