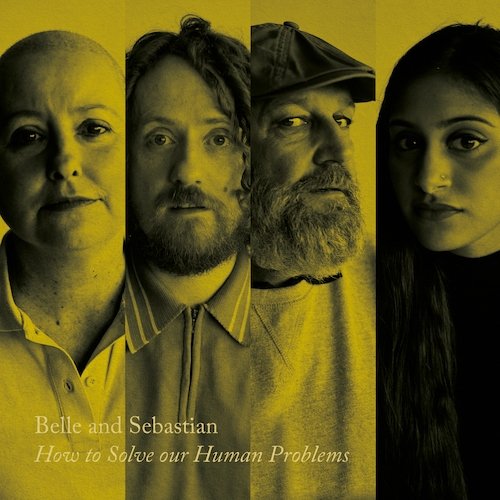 How To Solve Our Human Problems - Part 2

Second on the ride of Belle & Sebastian’s EP journey, they seem to have tightened things up from last time. While still a stylistic mishmash of various styles, every song on their new EP is as long as it needs to be. They never feel out of place in any of their various takes on pop either, making the lack of cohesion more fun than annoying. While there’s definitely a weak point or two in the listen, these are some of the band’s most exciting tracks in some time.

The band offers up much more exotic grooves as Part 2 opens on the deep rhythms of “Show Me The Sun.” For one of the most psychedelic tracks the band has put out to date, the track doesn’t lose their sense of hope or harmony either. Murdoch’s vocals guide the background chants, as the roll of bass and drums throttles listeners again and again. Their trippy dive into an ethereal bridge opens the song up to even more bizarre vocal work, providing a shocking sense of dynamics in the track. Returning to their mesmerizing chant hook, the band pops back in even more aggressively to close the song with one of their most vicious guitar solos ever.

“Same Star” switches to much lighter and upbeat dance melodies, as the glossy jazz chords give the song a more trance-like feeling. The call-and-response style verses carry a surprising amount of emotional depth, with each one of the band’s instrumental licks colouring the song in more beautiful shades. They gain a euphoric quality every chorus with the rising bass lines and pumping vocals, as the whole band seems to sing along with Martin. Along with the majestic trumpet hooks, there’s a wonderfully triumphant feeling to the guitar riffs that fly along them at the end, closing the song with classic rock sheen.

The punchy clarinet that starts “I’ll Be Your Pilot” has an immediately memorable grab to it, making the song feel of another time. While Murdoch’s bridges are almost too stripped back to hold any interest, the emotional weight of his lyrics at least keep things interest. They quickly give more wonder to the song in every chorus however, with the glistening organ lines opening the song up a lot. Unfortunately, much of the song just doesn’t take things far enough to hit the mark the band usually hits, making every clarinet refrain more gripping.

“Cornflakes” totally shifts aesthetic, with a retro-pop fidelity and a very busy production making the song feel quite remove from the rest of the record. The magical harmonic hooks in each chorus are just as interesting as they are frightening, offering a sense of duality that gives the song more depth. Each chorus finds the drums and vocals escaping the rest of the production, as lyrics about Glasgow fly lovingly throughout it. The outro’s unnerving disco feel ramps up to anxious peaks as well as the subdued electronic elements of the song slowly take over its composition.

The downbeat reverb of “A Plague on All The Other Boys” makes Murdoch’s melancholy delivery all the more real and hard-hitting. Each sad instrumental swell is an emotional wallop in the track, like the many chant-like vocals that fly under them. The bright strings and keyboard hooks of the second half make the song more hopeful however, as the song seemingly leans into its fairytale overtones wholeheartedly.