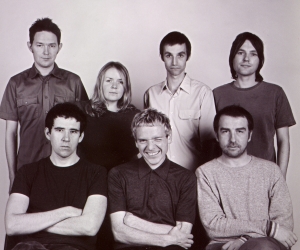 Belle & Sebastian are set to release ‘The Third Eye Centre’ – a collection of rarities, collectibles and non-LP tracks from the last decade – on 27th August 2013 on Matador Records. The album will be available to buy on CD, download and as a double heavyweight vinyl in deluxe heavy gatefold packaging.

You can listen to the brand new track ‘Your Cover’s Blown (Miaoux Miaoux Remix)’ from the album above:

I’m A Cuckoo (Avalanches Remix)
Suicide Girl
Love On The March
Last Trip
Your Secrets
Your Cover’s Blown (Miaoux Miaoux Remix)
I Took A Long Hard Look
Heaven In The Afternoon
Long Black Scarf
The Eighth Station Of The Cross Kebab House
I Didn’t See It Coming (Richard X Mix)
(I Believe In) Travellin’ Light
Stop, Look And Listen
Passion Fruit
Desperation Made A Fool Of Me
Blue Eyes Of A Millionaire
Mr Richard
Meat And Potatoes
The Life Pursuit