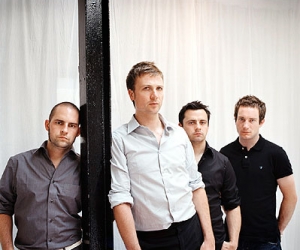 “From the moment I heard demos, I knew this was a special batch of songs, nestled in the sweet spot between wistfulness and joy,” explains Thomas Bartlett, who oversaw Bell X1’s sixth album alongside the National’s longtime producer (Peter Katis). “The challenge was in making the songs rich and robust without losing the fragility and intimacy that made them so striking in the first place.”

The solution was actually quite simple: Rather than rely on malevolent noise makers and malfunctioning computers like Bell X1 did on their last couple LPs, Chop Chop shaves their melancholic sound—sculpted by frontman Paul Noonan, bassist Dominic Philips and multi-instrumentalist David Geraghty—down to nothing but reverb-trailed riffs, wildly expressive vocals and delicately layered rhythms. That way everything at least feels effortless, whether it’s the hypnotist hooks of “Starlings Over Brighton Pier,” the brain-burrowing torch balladry of “Careful What You Wish For,” or the heart-sinking apocalypse now narrative that is “The End Is Nigh.”

Furthering each track’s inherent tightness were Bartlett and Katis, co-producers who deserve sidemen credits for coloring outside the lines, nipping and tucking the sound of the thing. “I had seen Thomas play a few times with The Gloaming, and was really struck by what he brought to what I suppose is an Irish traditional music supergroup—less yellowing pints of stout in harsh light, more velvet furnishings and fine wine,” explains Noonan. “And the skill with which Peter places elements in the mix is truly a marvel. He made us feel like he was as invested in this as we are.”

The feeling was mutual, as the group embraced their long overdue live/work situation overseas, recording the album at Tarquin Studios in Bridgeport, CT. “I can’t remember the last time I was part of a record that was recorded, mixed and mastered in only two weeks,” says Katis. “The guys came in really prepared song-wise and performance-wise. We had a ‘live’ setup of drums, bass and upright piano all in the same room—tracking to tape, going for full takes. It was a slightly old-fashioned approach, without the usual digital safety net, and I think that energy comes across in the music.”

“We returned to simpler times,” adds Noonan, “when all around here was fields. Shrink the palette, you know? Chop chop!”