Brooklyn-based four piece Bear Hands have announced the release of their sophomore album Distraction, out on February 18, 2014 on Cantora Records. ”

This winter, Bear Hands will join forces with fellow Brooklynites Miniature Tigers for a co-headlining tour, with support from Total Slacker. The jaunt begins on February 27th at Rough Trade in Brooklyn and wraps up on March 20th at the Blind Pig in Ann Arbor. Additionally, the band will play South By Southwest in Austin in support of Distraction, with specific showcases to be announced soon. Full tour dates are below.

With Distraction, Bear Hands wanted to create a more expansive sound, to build on the three long years and thousands of miles on the road. Produced by guitarist Ted Feldman and mixed by James Brown (Nine Inch Nails, Arctic Monkeys, Foo Fighters), Distraction is a violently self-assured record which sees the quartet of Dylan Rau, TJ Orscher, Val Loper and Feldman distilling their anxieties and pleasures alike.

After releasing their debut LP Burning Bush Supper Club, Bear Hands criss-crossed America opening for the legendary GZA, Passion Pit, and AWOLNATION only to return home to Brooklyn and be distracted by the minutia of modern life and shallow urbanity. While avoiding each other for months, the band frittered away its time with help from the internet, serial monogamy, and recreational drugs.

9. Sleeping On The Floor 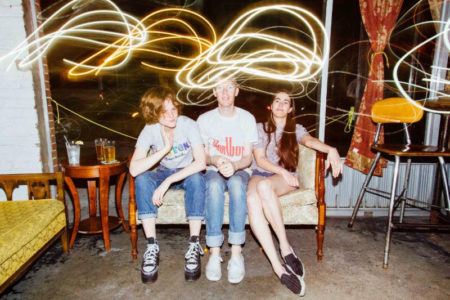