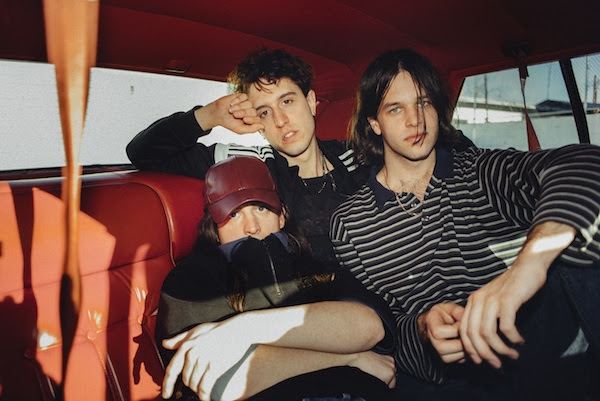 Beach Fossils don’t take a typical approach to writing a song. Recording individual parts as they come to them, the band went through almost three albums of writing before working the bits and pieces together that would eventually become their new album Somersault. Pretending they were doing the interview before we even started talking the band was in good spirits about their new record. Speaking to Dustin Payseur with interjections from his bandmates we talked sampling oneself, adding strings and woodwinds, and allowing for collaboration.

Northern Transmissions: The instrumentation on this new record is so rich and diverse, what inspired you guys to expand it so much?

Dustin Payseur: That’s always been a really big goal of mine. I’ve always wanted to make a record with that feeling. You start adding these elements and it becomes something bigger than just the songs themselves, they take on a bigger personality when you add string arrangements and piano. If you have a really simple song you can dress it up to make it flourish and bloom. I’ve never really known how to do it or find all these people, so it was years of us experimenting.

NT: Did you find you had to write it out to keep things true to your sound or did you let the extra musicians improvise their parts? I heard you sampled some of it too?

DP: For all the keyboard stuff and harpsichord, that’s just Tommy, he played the parts himself. We had pedal steel, and we told him to try whatever he wanted and we gave him a bit of direction. The only thing we were really hands on for was string arrangements, we made a point to write them all ourselves. When we were working on it, we could hear what the strings should be doing and we were very controlling of what they would be. We slaved over transcribing key arrangements.

NT: I know Dustin was doing a lot of the writing in the past, so what changed going into this record?

DP: It started as a matter of efficiency, I was here by myself just working on songs. It just became natural to me to work on songs, it never crossed my mind to do a collaborative effort. But the more we were touring, we were writing these songs, Tommy and Jack were coming up with really cool parts and we’d layer on top of them, before you knew it we had songs, and then an album. Most of the time in our studio is just writing music instead of practicing.

NT: What inspired you guys to sample your own material on this record?

DP: That was a big goal with the record. We don’t really write songs in a traditional way. We write parts and we don’t really know what to do with them. After a while we have all these parts in a sample library and we put them together. We listened to J. Dilla and thought it would be cool to do it ourselves, except we’re using us.

NT: What was it like working with Jonathan Rado on this record and what do you think he brought to the recording?

DP: I really liked how he mixed stuff down, with Foxygen and the Whitney record. So we got in touch and booked some time in L.A. for three weeks. We had an extremely different approach to recording, because he’s so analog. So we would record everything on tape, and bring it home and put it into Logic and chop things up, mixing it with stuff we’d recorded in our own studio. The tape-wizard charm he has with everything was there, he’s very like Todd Rundgren. It’s cool because I love the texture from recording analogue but like mixing in digital.

NT: Was it exciting to release your own record on your label?

DP: It was really cool being part of every step of the way instead of finishing and turning it in to somebody. There were no rules and restrictions, I could book everything myself and get lost in the project without worrying about turning it in. That freedom was essential, the record wouldn’t exist under another label. We had finished three albums during the making of the album and none of those songs made in on the record.

NT:You brought Cities Aviv in for the record, how did that start and what was it like merging hip hop into your more indie sound?

DP: The beauty of pulling from hip hop is it’s also sampling soundtrack music and all these genres we’re also listening to. We’d think about the way stuff in hip hop was arranged and enjoying what came out when we tried it. When you set restrictions on what you can do, you ruin the potential. We’re just trying to write songs that sound like what we’d want to listen to, without being derivative. We’ve all been buds with Cities Aviv for a while. We sent him a song and he was really into it. He came by the studio, and the track was going to be instrumental and he did a spoken-word thing on top, it came together really quick.