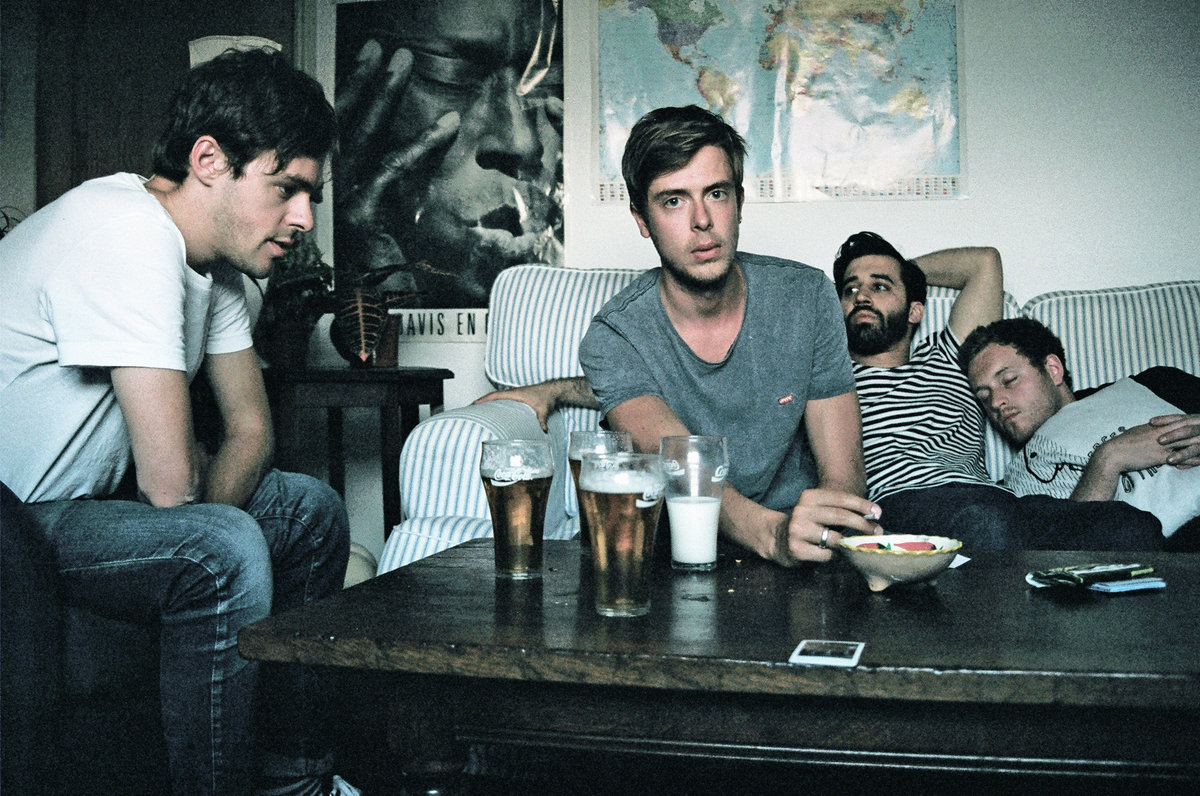 What Ollie calls the “initial spark” for the band occurred eight years ago, outside a Halloween party at a student bar at the University of Bristol. Lawrence, who was dressed like Malcolm McDowell in Stanley Kubrick’s A Clockwork Orange at the time, asked Ollie if he played bass. Ollie lied and said he did. Fortunately he could play guitar. Lawrence and Ollie continued writing and playing together in various bands until, after moving back to London, they auditioned a new drummer from Sheffield called Shep and in 2013, Beach Baby was born.

Along with original bassist Iraklis Theocharopoulos, the band spent the following two years focused purely on rehearsing, writing, and honing their sound. They each supported themselves throughout this creatively intense period with odd jobs that included working in burger joints, as teaching assistants, and even as ‘charity muggers’. Lawrence has perhaps the oddest of odd jobs, working as a script reader for production companies like Icon.

Towards the end of 2014, the band reached a breakthrough when they wrote their early single ‘No Mind No Money’. “That felt like an arrival point for us,” says Ollie. “It crystallized a lot of the different things we’d been doing. It felt like the best song we’d written so far, and encapsulated what we wanted to say in our music and how we wanted to sound. It was the best demo we’d recorded up to that point, and then the best recording – but it has been bettered!”

By the summer of 2015 the band realized they’d written enough songs to fill their debut album three times over and headed into Unwound Recordings, on Hackney Road in East London, with producer Adam Jaffrey (Bloc Party, Dev Hynes, Wytches). The month before they went to record the album was a creatively fertile time for the band, producing future singles “Sleeperhead” and “Limousine”. While still influenced by classic songwriting (The Beatles, Bob Dylan, Neil Young), the band’s touchstones had now evolved to include the likes of Parquet Courts, Mac DeMarco, Ariel Pink, and cult lo-fi artist Cleaners From Venus.

As co-writers, both Ollie and Lawrence contribute equally to the idiosyncratic lyrical tales which shape Beach Baby’s world. “It’s fun for me when Ollie writes a song that’s fairly full-fledged but has a gap in it,” says Lawrence. “It happened with “Lost Soul” and with “Limousine”. I get the chance to add a little thing into something pre-established. It’s a good game to get your head into the space of the song and bring yourself to it.”

One of the things that sets Beach Baby’s music apart is the gleeful way in which they upend musical convention. “I struggle with the idea of writing love songs,” says Lawrence. “If that’s an element within a song, I always have the instinct to treat it a little bit sarcastically, to turn it on it’s head into something unexpected, or maybe slightly unpleasant. I’ve always like character-driven songs. The final track “How Lucky You Are” came from the idea of inhabiting a different headspace rather than just writing from your own perspective. It’s funny, as soon as you start doing it you also find yourself massively coming through.”

Following the initial recording sessions last year, Beach Baby’s debut record was finished with a second stint at Unwound at the start of 2016. Still writing new songs, it was during those sessions that “Lost Soul” was recorded and added to the record.

A couple of months later, family circumstances led bassist Iraklis to leave the band. “I’ve learned a lot from playing with these guys, and from learning his basslines,” says Jack, who’s replaced him. “They were really fun to learn”.

Listening to the album, that comes as no surprise. The music reverberates with an insouciant joy. “We’re all really chuffed with the eleven tunes that have ended up on this album,” concludes Lawrence. “It became quite natural and quite easy to tell which songs were the ones to be whittled out of what we had. I’m really excited to have it as a body of work, whatever may come of it”.

No Mind No Money is out now on Island Records/Caroline.

* all dates with Beaty Heart