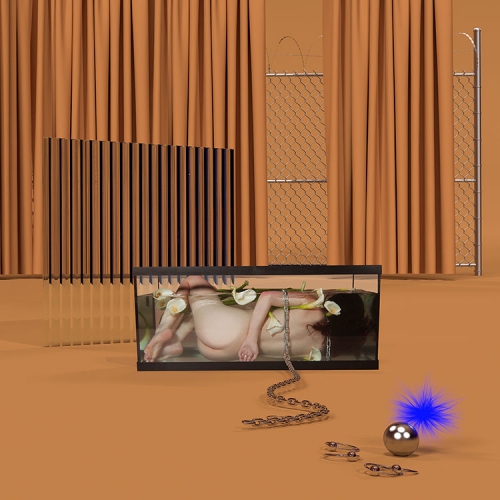 Longtime Canadian indie label extraordinaire Arts & Crafts has been known for producing acts that are relatively light on the ears, like Stars, Timber Timbre, and most famously, Broken Social Scene. That said, the grungy Toronto post-punk outfit Frigs (previously known as the Dirty Frigs) are flipping that narrative on its head with their debut LP for the label. After garnering some initial buzz with their Slush EP in 2016, the quartet have delivered their full- length debut Basic Behaviour. The end result is a band showcasing a sound that’s as raw and uncompromising as ever, though this time with a bit more sheen and polish.

A major selling point of frontwoman Bria Salmena’s voice is her adeptness in jumping between a deeper, calmer tone and a howitzer of a shriek and howl. This sort of contrast culminates in a voice that brings PJ Harvey, Jehnny Beth of Savages, and Kim Gordon to mind. While we don’t hear her do the latter as often as one might like – her wailiest performances are arguably on closing tracks “Chest” and “Trashyard” – her singing style still carries the album nicely regardless of tone.

Instrumentally, the four-piece sound right at home with the Preoccupations of today’s Canadian music scene, though perhaps with a bit more of an emphasis on melody. Low bass riffs, whether upbeat or droning, carry songs like “Solid State”, “Waste” and “Trashyard”, while other songs are buoyed by dissonant guitar noises (“Gemini”), and hazy, Joy Division-esque textures
(“Chest”).

Although there’s no questioning Frigs’ ability to convey raw emotion and a sound that’s both melodic and experimental in varying bursts, it does feel at times like certain tracks could have used a bit more time in the oven. Opening tracks “Doghead” and “Talking Pictures” seem to end a bit anti-climactically, and their short runtimes (2:10 and 2:32 respectively) don’t really give them enough room to allow the songs to really take off into orbit.

There’s something to be said about how repetitive their lyrics can be, too: case in point, songs like “II” are driven by lines like “This is shit, just admit it, just admit it, this is shit/Do you know where you are? Do you know where you are?”, and likewise for “Doghead” (“He put his tongue in sordid pies, he put his tongue in sordid pies…”) and “Waste” (“Waste, it’s such a waste, it’s such a waste…/Do you wanna talk about it? Do you wanna talk about it?”). While it fits the unsettled and grimy feel they seem to be going for, they’d do well to work on exploring and growing their lyrical creativity.

Though the moody and occasionally brash tone of the record helps accentuate Frigs’ potential as a band, and they’ve got a solid grip on how to execute that style, some songs feel very fleshed out while others don’t. That said, there’s plenty to like about the direction they’re going in here. They smoothly mix sounds and tropes from post-punk, garage rock, sludge and grunge quite efficiently without necessarily being too much of one to be pigeonholed, even if the songwriting needs tweaking in certain areas. With a debut like Basic Behaviour, though, there’s no reason to believe that can’t come with time.