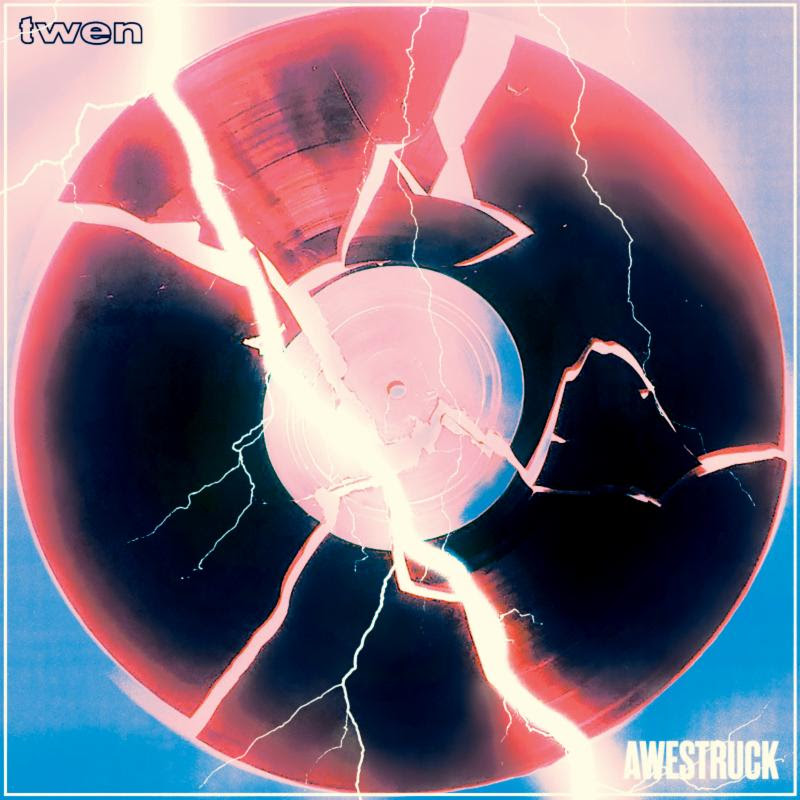 Indie rock is such a broad genre description. It’s such a wide umbrella that many of the acts that dwell underneath it only have one thing in common and that is a keen sense to keep their music defiantly original and interesting, while still harkening back to some touchstones that have influenced any type of rock and pop music over the decades. One band that surely fits this bill is Nashville’s Twen. The duo, made up of Jane Fitzsimmons and Ian Jones, have been bubbling up from the DIY scene of their former home base of Boston to stages all over the world and they are finally readying to unleash their debut record, Awestruck, into our collective ears this Friday.

You are immediately thrown into Twen’s big, bombastic indie rock with the lead off track, and album namesake, “Awestruck”. It’s a huge opening statement. One that careens purposefully through it’s just under three minute runtime. The duos vocals play off each other in such a unique way, as the guitars swerve in and around the vocal melodies before everything explodes into a gigantic half time crescendo of a climax. This is followed up with “Damsel”, a disarmingly perfect pop song. One of the stronger aspects of the album is the bands huge, soaring vocal melodies. They’ll just pull you right in and by the time we get to the tracks tension filled bridge, you’ll surely be hooked. “Honey Smacks” slithers right in afterward with a grooving, crawling guitar line perfectly complimenting the vocals before reaching, what can only be described, as Twen’s take on funk before leading into the outro. Funk is a terrible descriptor for something that simultaneously grooves but is completely without any of the cringe factor of that genres more notable aspects. “Long Time” showcases the more psych-y parts of Twen’s repertoire. The production on the album so wonderfully captures the chemistry the two piece have. Highlighting some big room sounds that allow the space between each note to take up as much space as the notes themselves. This big, roomy feel of the recording just meshes perfectly with the bands songwriting.

The musicianship on the Awestruck is also quite impressive. The band toured straight for two years after they released their Live EP and it clearly shows on the record. The vocals and harmonies are perfection, the playing is always interesting and when they take things a bit slower, like with the huge drum break on “Make Hard”, it all just gels together so perfectly. It’s rare to hear such an accomplished live act captured so wonderfully on an album. Twen has been saddled with genre defining descriptions like shoegaze but their music manages to transcend such things. The songs straddle the line between haziness and crispness. “Waste”’is a great example of these things coalescing within the same song. There’s a intangibility to the vocals but they are sitting just above the surface of some crystal clear and hard hitting drums and guitars. “Azkaban” fits more in line with Twen’s DIY scene upbringing. It’s a bit scrappier than most of the other tracks on the record. Each track on Awestruck is a small journey unto itself, the band consistently plays with their arrangements to keep things interesting but it’s not just art for arts sake, it’s all rooted in a masterful, maybe instinctual knowledge of pop songwriting.

Awestruck is one of those debut albums that will signal the arrival of some major new talents. It’s a bold, interesting and majorly catchy statement from a band that will surely be spoken about in high regard for years to come. Twen have taken the indie rock genre and made something uniquely their own. It’s pays tribute to what’s come before but still comes off as a uniquely modern sounding, wonderfully performed and executed collection of songs that will be a treat to hear in the comfort of your home as well as a sweaty club full of strangers.

Awestruck comes out on September 21st, via Frenchkiss Records