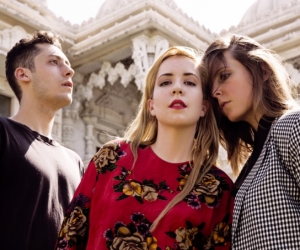 Austra will be back in the UK and Ireland next month to perform four shows including a show at KOKO in London on November 25th.

Olympia is an album of transformation; it presents a quantum evolution in the Toronto-based band’s sound, structure and style. Olympia is also the first confessional record for the principal songwriter/vocalist, Katie Stelmanis, whose heartfelt lyrics touch on a range of sentiments that stem from a relationship ending, a relationship beginning, and friends’ struggles with addiction and motivation.

Written and recorded in collaboration with members of Austra’s touring band, the album takes influences from musical sources including South American wind ensembles, eastern folk music, 80s industrial and Chicago house. Olympia remains a pop record of deep layers and subtle gesture; one that requires patience to absorb the nuance to be found within its layers.

Forgive Me is the latest single to be released from Austra’s second album Olympia, and will be available as a three track digital bundle (RUG563) from 25th November 2013, alongside two new tracks, Hopeless Place and Holy Place.

Austra is Katie Stelmanis, Maya Postepski and Dorian Thornton, and they will be joined on this tour by Ryan Wosniak.