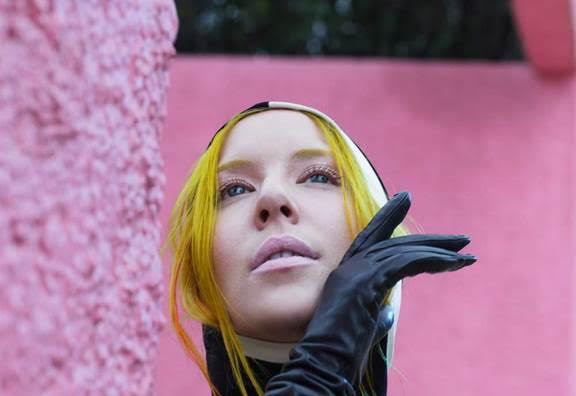 Austra, led by vocalist and producer Katie Stelmanis, has revealed Future Politics, their third full length, comes out June 29th via Pink Fizz Records.Along with the announcement is a video for the lead-track “Utopia”. Directed by THAT GO (Chairlift, Lapsley, Father John Misty)

“Katie came into the video project with a lot of ideas about the future,” says THAT GO. “We discussed everything from food trends to Star Trek: The Next Generation. The video is more near-future than distant-future, with recognizable technology and modern protein sources.”

Future Politics, calls for radical hope, “a commitment to replace the approaching dystopia,” says Katie Stelmanis, who leads Austra with the support of Maya Postepski (Princess Century, TR/ST), Dorian Wolf, and Ryan Wonsiak. “Not just hope in the future, but the idea that everyone is required to help write it, and the boundaries of what it can look like are both fascinating and endless. It’s not about ‘being political’, it’s about reaching beyond boundaries, in every single field.”

Future Politics is a collection of urgent, but disciplined anthems for dancefloor and headphones, asks each of us to remember that apocalypse is not an inevitability, but the product of human decision-making. It aims for a world without borders, where human compassion and curiosity drive technological innovation rather than profit, where the necessity of labor is replaced with time for creativity and personal growth, and the terror and destruction wrought by colonialism and white supremacy is recognized as a dark age in human history. The album is radicalism distilled: to galvanic beats, gorgeous, kinetic melodies, and the vulnerable majesty of Stelmanis’s voice.

Inspired by her time living in two cities – Montreal and Mexico City – and propelled by economic and philosophical texts she was reading throughout the album’s creation, Stelmanis was driven to face the world’s ailments with positivity, purpose, and engagement, rather than detachment or despair. Inspiration also came from European club culture – Objekt, Peter Van Hoesen, Lena Willikens, and ‘90s legends like Massive Attack; in all, artists who understand the dancefloor as a source of radical ideas and radical joy.