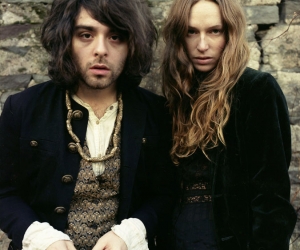 Additionally, The Reverberation Appreciation Society — the engine room and label arm of Austin Psych Fest — is pleased to announce the release of Golden Animals’ HEAR EYE GO on September 24th. In conjunction with this announcement, the band premiered their video for their single “You Don’t Hear Me Now” and is available to view HERE. More details are below.

The 7th annual Austin Psych Fest will be held May 2-4 2014 at Carson Creek Ranch, and discounted $120 tickets are on sale now. Lineup and full details coming in the Fall, and tickets information is available blow.

Austin Psych Fest is following up the 2013 festival with its first international event : Levitation – France. This two day event will be held in Angers, FR at Le Chabada on September 20 & 21st and will feature performances from:

The full lineup will be released in July along with single day tickets. Two day passes are on sale now for 40 euros HERE

Austin Psych Fest has teamed up with French partners Radical Production and the Angers venue Le Chabada to bring the Austin Psych Fest experience to France. This first event will be an intimate festival, held in the 900 capacity Le Chabada, Angers’ premiere rock venue. The festival is part of the Austin-Angers Music partnership between the two sister cities.

Angers sits about 300 kilometres southwest of Paris and along train routes from all over Europe (1h30 by fast-train TGV from Paris), providing easy access to attendees in France and beyond.

In addition to the weekend festival, Austin Angers Music will host other events celebrating psychedelic culture including an album cover and poster exhibition, film screenings and more.. Details and a full daily program will be kept up to date on AustinPsychFest.com and lechabada.com

Brooklyn duo Golden Animals’ HEAR EYE GO released on Vinyl, CD, Cassette and Digital formats on September 24th, 2013. HEAR EYE GO is the follow-up to their 2008 debut Free Your Mind and Win a Pony. The video for “You Don’t Hear Me Now,” off the upcoming record is now out. The clip, directed by Jennifer Tzar.

Dividing their time between the extremes of Brooklyn and the California desert since their 2006 inception, longtime friends Tommy Eisner (vocals/guitar) and Linda Beecroft (drums/backing vocals) construct tales of love, friendship and seclusion while keeping their sound simultaneously energetic and meditative. They view their two home bases as complementary influences, shaping their sound equally but very differently.

Golden Animals’ commitment to the fruits of their labor is impressive-the band recorded an entire LP in a California cabin, only to scrap it upon finding that limitations on their recording process diminished the power of the tracks. That rigid commitment to their work is readily apparent throughout HEAR EYE GO’s 10 tracks–they’re exactly what they need to be, full of rock and roll energy and devoid of filler.

Despite its full-bodied sound, no bass guitars or organs were used in the record’s creation-it’s all drums and guitar. HEAR EYE GO was recorded by Matt Boynton (MGMT, Kurt Vile) at Vacation Island Recordings, and by the band themselves at their own studio. Joe LaPorta (Foo Fighters, Beach House) mastered the album at The Lodge.

05 Never Was Her Name