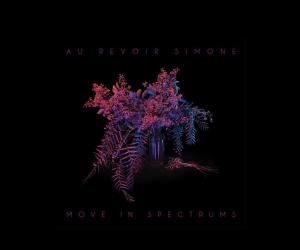 Ahead of their London show at XOYO on Tuesday, Au Revoir Simone have shared the new video to “Crazy,” the second single off of their highly-anticipated album Move In Spectrums. The band take on roles as downtown weirdos and punk rockers for the video, in tribute to the highly undervalued 1980s movie After Hours, directed by Martin Scorsese. Watch it above…

Following the release of three albums, ‘Verses of Comfort, Assurance and Salvation’, ‘The Bird of Music’ and ‘Still Night, Still Light’, Au Revoir Simone simply felt they needed a break. They had toured all over the world, been involved in exciting collaborations with the likes of Air and Johnny Marr, and became the favorite band of legendary director David Lynch in the process. They tirelessly gave their all to audiences around the globe, filling rooms from Tokyo to Reykjavik, from Montreal to Sao Paolo.  And when the touring cycle ended, they decided to each take their own path, unsure where the band would end up in the process.