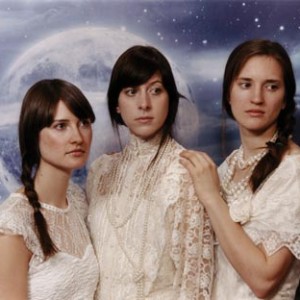 Today the keyboard-wielding ladies of Au Revoir Simone have premiered “Crazy,” the second single off of their upcoming album Move In Spectrums. Au Revoir Simone – consisting of Heather D’Angelo, Erika Forster and Annie Hart – go in a completely different direction musically in “Crazy,” adding an edgy, bass and drum-heavy sound to their perfect synth-laden melodies. Listen above…

Brooklyn, NY’s Au Revoir Simone will release their first album in four years, ‘Move in Spectrums’ on September 23rd through Moshi Moshi. Produced by Violens’ Jorge Elbrecht, ‘Move in Spectrums’ is the follow up to 2009’s most successful record yet, ‘Still Night, Still Light’.

There are, of course, the obvious questions surrounding this album, such as:  where have the three immensely talented, keyboard-wielding women of Au Revoir Simone – Heather D’Angelo, Erika Forster, and Annie Hart – been? Why have they not released an album since 2009? What’s this new album like anyway – has their sound changed? Obviously, we’ve got some answers for you.

Following the release of their three well-loved albums, ‘Verses of Comfort, Assurance and Salvation’, ‘The Bird of Music’ and ‘Still Night, Still Light’, Au Revoir Simone simply felt they needed a break. They had toured all over the world, been involved in exciting collaborations with the likes of Air and Johnny Marr, and became the favorite band of legendary director David Lynch in the process. They tirelessly gave their all to audiences around the globe, filling rooms from Tokyo to Reykjavik, from Montreal to Sao Paolo.  And when the touring cycle ended, they decided to each take their own path, unsure where the band would end up in the process.

For Heather, this meant finishing an environmental biology degree at Columbia University that she had started around the time of the band’s inception.  For Erika, this meant releasing a gorgeous solo album under her name, Erika Spring. For Annie, this meant touring with the likes of Uninhabitable Mansions and Pursesnatchers. Projects and collaborations, such as scoring a short film by Giada Colagrande for Miu Miu, would come up and bring the girls back together again, but for the most part, the future of Au Revoir Simone was unclear.

The result is ‘Move In Spectrums’, an album that – like its title – creates different melodic textures and aural colors via the finest songs Au Revoir Simone have ever recorded. The album is an honest refraction of three lives weaving together in a thirst for life, sensation, truth and love.