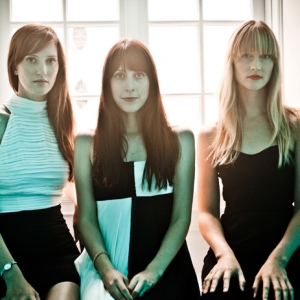 Earlier this year, Au Revoir Simone released their fourth album ‘Move In Spectrums’ via Moshi Moshi Records. ‘Move in Spectrums’ is the Brooklyn-based trio’s first album in over four years.

The album was produced by the band and Violens’ Jorge Elbrecht and saw Au Revoir Simone – consisting of Heather D’Angelo, Erika Forster and Annie Hart. Having each taken a break after touring their last album ‘Still Night, Still Light’, they individually started writing again. Eventually, they shared their creations with each other; the result produced the sort of excitement and chemistry that has always marked the friendship between these three ladies. They swiftly became engulfed in creating another record.

Having played a show at XOYO around the album release, the has announced they will return to Europe for a full tour next year including a NME Award Show in London. After the European tour, the girls are back to the US for a tour supporting Broken Bells.
Au Revoir Simone – NME Award Show
20th Feb 2014
The Garage, London
20-22 Highbury Crescent, N5 1RD
Tickets on sale Fri 6th Dec 9am from here.