Astralingua is Composer Joseph Andrew Thompson and backing vocalist Anne Rose Thompson. The Denver, Colorado duo describe their music as “Space Folk, which lies somewhere between Classical, Folk, Psychedelia, and Pop”. Astralingua debuted in 2008 with their EP Contact, an experimental world fusion/rock project. The sessions featured performances by many respected San Francisco Bay Area musicians, including Paulo Baldi (Cake, Les Claypool), Eddy Navia (Savia Andina, Sukay), and Ralph Carney (Tom Waits). Astralingua’s forthcoming release Safe Passage, will be available March, 8th via Bandcamp. Ahead of the album’s release, the duo are streaming it with us, in it’s entirety as well as a description of each song’s individual meaning.

Every soul wanders its own road through eternity. Along the way, the astral road sometimes merges with the physical, and what we call ‘life’ is travelled for a time. Though we take these two paths simultaneously, by some design, we often struggle to see more than the physical around us. Still, intimations of the eternal
beg our recognition, and the overlapping paths create a veritable crossroads, upon which entities of the astral world are encountered, disguised in various forms. Ever the more strange, the soul and body can, at times, wander their own roads independently, with one going where the other cannot. But alas, apparent progress made on one road does not always equal the same on the other, and false turns turn to dead ends with no short cuts to be found. Fraught with trial and tribulation, we seek safe passage and eventual resolution, striving towards release from our earthly restraints. The end is inevitable. But every ending is a beginning, and every beginning an end.

“Plunge” We begin with a scene on a river. A probable catastrophe draws the singers near. With no choice in what is to come, they take courage and embrace their fate. The scene is a metaphor for life, the river another version of the road.

“Visitor” Somewhere on the road, this ‘High Strangeness’ encounter with an otherworldly being occurs, and is akin to Schubert’s/Goethe’s Erlkönig. Who is this being and from where does it come? Separation, enchantment, and vulnerability all mix and ask: If all life ends and death is inevitable, are we really ‘home’ here in this life? Should I follow this being? What are its true intentions?

“Sweet Dreams” Are there places where the dead can commune with the living? What are the roads that lead there? What is the ‘dream world’ and where does it lie? Is it more or less real than waking life?

“The Nimble Men” One must be very nimble to walk the road across the sky.

“Space Blues” The path has led one to alienation. Ultra-awareness or Big Mind isolates one from the others, leaving the soul somewhere between worlds. The unique path of curiosity and inquisition overlaps with little but emptiness. The further down this tangent you go, the harder it is to return to the point from which
you left, and a new and lonesome path must be forged before continuing onwards.

“Phantoms” Entities haunt one along the path. Are they real? In one’s mind?

“NSA” Is anything ever truly “no strings attached?” To whom do you entrust the power to keep you ‘safe,’ and what do they require of you? Who is following you on the road, watching your every step?

“A Poison Tree” Who is the victim in this poem by William Blake? What kind of Hell do we create for ourselves on the path? The would-be thief meets his demise through his own hand. Or, was it by the hand of the speaker? The speaker who plants the poison tree is consumed by his own wrath. In his final victory, does he prevail unscathed?

“The Fallen” Time goes on, people live and die, but human sorrow, when at its lowest depth, can sometimes live on, crystalized in the ghosts of the past that haunt the path we travel. Listen well to the stories of the road, for it is by their wisdom that one finds the way.

“Passage To Avalon” In Arthurian legend, Arthur, wounded in battle, escapes to the Island of Avalon to heal. Is there such a place? To whom is it accessible? Where lies the passageway? How beautiful a sight it would be!

“The Troubled Road” The once-intrepid wanderer, who began the album with courage and vigor, finds himself tired, forlorn, weary of the road, and ready for resolution. Where is it to be found? Where does the troubled road find its end? In this life? In the beyond? 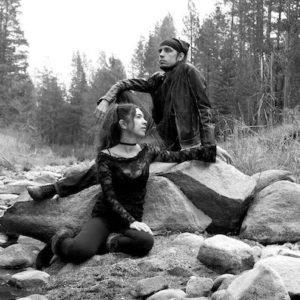