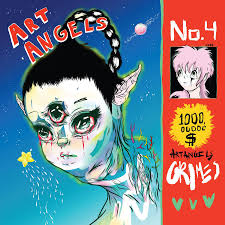 Last year, Grimes released a stand-alone single called “Go,” which she had originally written with the intention of giving it to Rihanna. Although RiRi turned the song down, the fact that Grimes was composing material geared towards a chart-topping radio star hinted at a radically different approach from the Montreal-based performer born Claire Boucher.

This was a million miles away from the avant-garde sounds of Grimes’ early releases like Geidi Primes and Halfaxa; back then, her technical skill was so limited that Geidi Primes was made using only the white keys on her keyboard. By the time 2012’s breakthrough LP Visions rolled around, however, Boucher had mastered her craft to the point that she was able to marry her adventurous leanings with wildly catchy, occasionally professional-sounding pop.

Art Angels is another meteoric leap forward in terms of songwriting and sonic richness. It’s a bright and wildly beautiful patchwork of kaleidoscopic textures, and its diverse arrangements boldly venture into spiky post-punk, hip-hop, EDM, strummy acoustic folk and candy-coated pop. Boucher recently noted on Twitter, “Every song on this album is a completely different style.” Paradoxically, it’s this sense of eclecticism that unites these 14 tracks, as Art Angels is a sonic collage of anything-goes weirdness. Boucher’s whims pull her in every direction at once, with her thumping beats and breathy pop hooks acting as the glue that binds her experiments together.

There are choruses here that would be right at home on mainstream radio. In particular, “California” is the latest in a great tradition of radiant pop songs about its titular state, with a chorus that resembles angelic yodelling and lyrics that hint at lovelorn idealism (“Broken my own heart again / Chasing something beautiful”) and dystopian morbidity (“When the ocean rises up above the ground / Maybe I’ll drown”). Its thudding electro-country two-step rhythm favours restraint over catharsis, but it’s easy to imagine the song as a massive Top 40 hit in the hands of a less adventurous producer.

Elsewhere, the stunning “REALiTi” (a holdover from a scrapped set of songs that Grimes abandoned prior to making Art Angels) blends dream-pop bleariness with the collection’s most straightforward dance beat, while “Flesh Without Blood” adds a dash of crunchy rock to the of palette synth-y sweetness. In regards to the latter tune, Grimes tweeted that it “isn’t about a breakup! I don’t write about love anymore.” Still, it’s easy to interpret the song as a cynical depiction of romantic confusion, as Boucher laments, “It’s nice that you say you like me / But only conditionally.” Other songs on Art Angels similarly hint at conflicted relationships: the giddy, “Steal My Sunshine”-cribbing “Artangels” has a refrain of “I think I love you,” while “Pin” is a depiction of “falling off the edge with you” in which the singer admits, “I was only looking for a human to reciprocate.”

Art Angels is the kind of album that can venture into Taiwanese punk-rap on the Aristophanes-assisted “Scream,” pastoral folk on the bite-sized interlude “Life in the Vivid Dream,” and cheerleader chants on the blood-splattered bubblegum “”Kill V. Maim.”” without coming across as gimmicky or unfocused. Amidst these unpredictable soundscapes, the choruses are so catchy and touching that it’s easy to forget just how weird this music is, and that’s what makes it such a thrill.