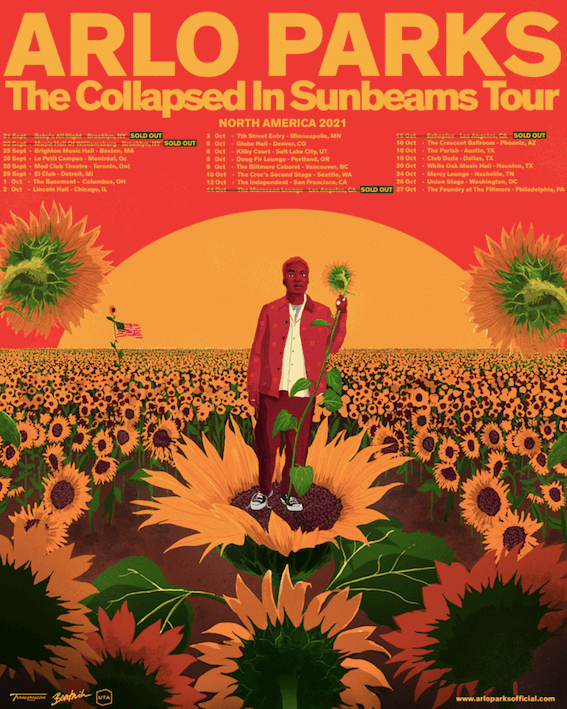 UK Artist Arlo Parks has announce a Fall North American tour. Starting September 21st in Brooklyn, she’ll make her way across 24 cities including stops in Boston, Toronto, Chicago, Seattle, San Francisco, Austin, and more, before concluding the run October 27th in Philadelphia. Tickets will be on sale here this Friday April 16th at 10am local time.

Arlo collaborated with Reuben Dangoor for her tour poster artwork below. Reuben shares about the collaboration, “I’m a massive Arlo fan, and I’ve wanted to work with her for ages, so it’s great to finally be able to do a project with her. The idea that anyone is doing a world tour is exciting enough given the year we’ve all had, so to be able to work on a series of tour posters for her is so cool.”

202, saw Arlo Parks release her debut album Collapsed in Sunbeams, which includes the singles “Hope,” “Caroline,” “Green Eyes,” “Hurt,” “Black Dog” and “Eugene”. The New York Times described the album as a “glimmer of possibility, that belief that the light at the end of our collective dark tunnel could be something other than another onrushing train.” She appeared on Later…with Jools Holland where she co-hosted the show and performed a stripped back version of “Caroline,” and she released a variety special Tonight with Arlo Parks, streaming now on Prime video.