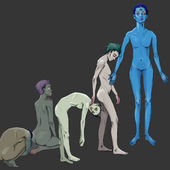 “Ardipithecus Ramidus is the scientific name of the first hominid bones found on earth. I wanted to name my musical compilation after it because, while I was making these songs I was in such a transitional state.”

This was part of Willow Smith’s statement upon the arrival of her surprise debut full-length, Ardipithecus, and it’s quite telling. The album cover hammers down this theme of evolution with its March of Progress-alluding artwork, which runs from a form in a fetal position towards a seemingly enlightened, third eye-tapping illustration of the solo artist.

If you haven’t been keeping tabs on the young singer, who happens to be the daughter of actors Will Smith and Jada Pinkett-Smith, it’s been five full years since she went on the radar with her tween-conquering dance track “Whip My Hair.” Since then, she’s issued singles with Nicki Minaj and popped up on soundtracks, but she started to shift towards something stranger in 2015. Her “F Q-C #7″  from last spring was a post-modern R&B slinker full of galloping vibraphone and lyrics about skipping classes. She is, after all, 15 years old. That said, it pointed towards an exciting new direction for the musician.

As such, the 15-track Ardipithecus finds Smith going all-out, offering an expansive journey in sound and through the human condition.

“Organization & Classification” is the first, and best, mind-blower of the set, hitting hard with a broken factory clank and evil, minor key synth blips. While giving credence to the lessons of the “ancients,” a running theme within the LP, Smith’s first line has her questioning the rules of the game, noting that they’re “ruining the minds of our generation.”

“I’m just a teenager,” Smith oozes out sarcastically, before hurling out a confident “but I am angrier than a swarm of hornets.” The song goes on to analyze systemic sexism, concepts of freedom, and her own skills behind the mic. It’s a brilliant bruiser of a cut.

Independence is key to much of Ardipithecus. Early track “Natives of the Windy Forest” celebrates the forest children doing their thing, and “trying to get you to sing along.” The buzz-heavy beat of “dRuGz” has Smith performing calming oms and getting comfortable in nature. “Don’t try to analyze the breeze,” she suggests as a life ethos, though the line could likewise land as a most meta nod to the critics.

Enthusiastically, she jumps through multiple genres on the album. “F Q-C #8″, a follow-up of sorts to “F Q-C #7″, has her mixing her pace. The front end finds her vocals ducking and weaving around xylophone plunks, while she encourages us to “get comfortable” for a slowed-down back section. Oddly, the beat skitters a bit faster beneath the ‘lax melody.

Elsewhere, she gels above a decent mix ’90s hip-hop smacks and neo-soul tones on “IDK,” grafts lines above a gurgling robotic electro rhythm on “Marceline Pt. 2,” and “Waves of Nature” hits big with an Island house beat and Smith’s boomed proclamations.

It’s an ambitious effort, and self-consciously so. “UR Town,” a hypnotic highlight that sounds as if Willow has been hooked on the XX for the last little while, has the artist reflecting on both past lives and her current approach. Of the latter, she’s pushing against any expectations the rest of the world has for her. “They said don’t walk fast, I took off running and was not-near stopping,” she reports.

That said, the 15 song set does tend to drag from time to time. Coming off an early trio of mind-benders, “Cycles” is a fairly straightforward track that has Smith pondering her purpose (“What the heck is happening?/Why am I here, why can I sing?”). “RANDOMSONG” is exactly what its title promises, an off-course, distorted and doomy quickie that, sonically, recalls Marilyn Manson’s late ’90s glam-goth period. Smith opts for a lower register for most of the track, sounding less comfortable here than when she lets her vocals soar.

Though Smith is clearly motivated to try all kinds of styles, the grab-bag approach makes for an overwhelming listen. The upside is that, despite the album art, this is really just the beginning of the artist’s career. Consider Ardipithecus the official jumping on point to something bigger and, hopefully, better.

Smith’s statement to the press also explained that she had been “digging deep in the soil of [her] heart” to make this record. Here’s to wondering what exactly she’ll find next.